Why So Much Vaccine Hesitancy?

Only a month ago, it seemed as if we were putting COVID-19 behind us. With the emergence of the super-virulent Delta strain, all bets are off. Even vaccinated people and virus-resistant school children are being called upon to start wearing masks. I have no set opinions on the proper course of action. Receptive to a wide range of viewpoints, I am in data-gathering mode. Suspecting that many other readers are as well, I am resurrecting a Bacon’s Rebellion feature from earlier in the pandemic in which I regularly posted snapshots of Virginia COVID data.

The graph above highlights the fact that almost everyone who wants a vaccine in Virginia has been able to get it. The state has received 10.2 million doses, of which 87.5% have been administered. The rate at which the state is receiving new vaccine supplies, an indicator of how many people are getting vaccinated, has tailed off to almost nothing. Earlier this year, vaccine supply was the bottleneck. Today, vaccine hesitancy is the problem.

One can debate whether COVID survivors or young children, both of whom are highly resistant to the virus, should be compelled to get the vaccine. Every individual has a different risk profile, and I’m not inclined to dictate to them. However, from a society-wide perspective it is clear as spring water that increasing the percentage of vaccinated people lowers the rate of viral spread.

The question that arises is this: How do public health authorities persuade people to get over their vaccine hesitancy?

The Northam administration would be well advised to spend a sliver of its $4.3 billion in federal helicopter dollars to understand the sources of vaccine hesitancy in different segments of the population. It might start by exploring the vaccination variability between racial/ethnic groups. 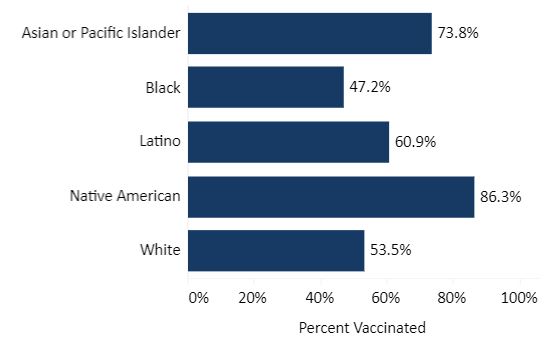 Percent of the population vaccinated with at least one dose — by race and ethnicity. Source: Virginia Department of Health

The table above shows the significant differences in the vaccination rates between racial/ethnic groups. Native Americans (who are “people of color,” incidentally) may comprise a tiny percentage of Virginia’s population, but they have the highest vaccination rate of all. An inquiry into vaccine hesitancy might inquire why.

Among groups comprising a large percentage of the state’s population, Asians/Pacific Islanders have the highest vaccination rate. That should come as no surprise given the fact that Asians also have higher household incomes on average, higher rates of educational achievement, and lower rates of dysfunctional behavior  — criminality and violence, out-of-wedlock births, sexually transmitted diseases, etc. — compared to other groups. An investigation into vaccine hesitancy might ask what makes Asians more receptive to getting the vaccine.

After all the hand-wringing over systemic racism and the need to target black and “brown” people for outreach, I was surprised to see that Latinos have a higher rate of vaccination than Whites. If the healthcare system is racist against black and brown people, how come so many more brown people have gotten the vaccine?

As for Blacks and Whites, their vaccination rates don’t differ that much. It would be helpful to know if race is the decisive variable — as one might assume if one believes the healthcare system to be systemically racist — or whether income or educational levels within each group is the key factor. I would hypothesize that less educated, lower-income people of any race are more likely to distrust the system and shun the vaccine. 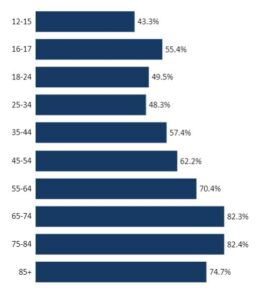 Percent of population vaccinated with at least one dose age. Source: Virginia Department of Health

I found this chart breaking down vaccination rates by age to be surprising. It shows that between 20% and 25% of the most vulnerable segment of society — people over 65 — have not gotten the vaccine. These people are at the greatest risk! How does one explain their hesitancy? Do they watch too much Fox News? Or do they look at COVID-related risks differently than the epidemiologists do?

There’s one more factor I never see mentioned in the media — the difference between sexes.

Percentage of the population vaccinated with at least one dose — by sex.

How do we explain the fact that a significantly higher percentage of females than males have gotten the vaccine? Are men more likely to be stupid, ignorant, redneck Trump voters? Or are women just more risk averse than men?

It strikes me that there is a lot we don’t know about the way people are thinking. We need to cut through the preconceptions of the media and the governing class. When we gain a keener understanding of why people are reluctant, we can do a better job of persuading them to get the shot.