Why Northam Is Such An Important Governor 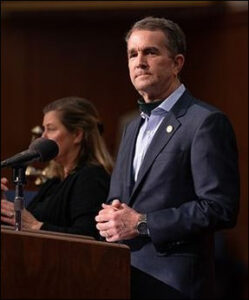 This is a bit like throwing chum at a school of sharks, but here is my latest in Style Weekly.

I wrote an assessment of Gov. Ralph Northam that is overall, quite positive. My take goes against much of the sentiment of other contributors on this blog.

They are entitled to their views but, to be honest, I find some of the essays shrill and not really fact based. If Northam wants to delay elective surgeries at hospitals for a week or so, some want to empanel a grand jury.

An acute care health facility in Henrico County becomes one of the most notorious hot spots for coronavirus deaths and it is immediately Northam’s fault even though the care center has had serious problems that long predated the governor’s term in office.

He’s a trained physician who served as an Army doctor in combat during the Iraq War yet he is vilified as being incompetent and incapable of understanding the COVID-19 pandemic.

It’s like the constant repetition of the “Sins of Hillary” on Breitbart and Fox News about emails and Benghazi.

Like him or not, Northam is bound to be one of the most consequential governors in Virginia history given the gigantic problem of the pandemic. He’s not a showboat salesman like Terry McAuliffe nor a smarmy, small-time crook like Robert F. McDonnell.