Why Is the CBF Fighting a Compressor Station 200 Miles from the Chesapeake Bay? 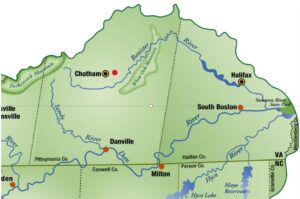 The Virginia Air Pollution Control Board voted 6 to 1 today to deny a permit for a natural gas pipeline compressor station in Pittsylvania County. The station is integral to the Mountain Valley Pipeline Project.

The site lies “within five miles of four communities with strong African American and American Indian roots” that are considered “environmental justice communities,” states a press release from the Chesapeake Bay Foundation. The CBF had joined the Virginia Sierra Club and residents Elizabeth and Anderson Jones in opposing the compressor station.

“We hope this shows that Virginia is prepared to make environmental justice a reality,” said CBF staff attorney Taylor Lilley in a CBF press release. “The safety of marginalized and vulnerable communities must continue to be a prominent consideration in these proceedings. This is also an opportunity to prevent a new source of air pollution to the Chesapeake Bay.” (My italics.)

Let’s set aside the precedent of shutting down a compressor station on the grounds that it is located five miles from a “marginalized” community. Let’s ignore the issue of what kind of economic opportunities the shutdown might foreclose for minorities. Please focus on the final sentence in the quote. If you thought that the mission of the Chesapeake Bay Foundation was to protect just the water quality of the Chesapeake Bay you are sadly mistaken.

The proposed location of the compressor station lies in the Dan River watershed. The Dan River flows into the Roanoke River, which flows into Albemarle Sound … in North Carolina. So clearly, there is no justification for the CBF to get involved on water-quality grounds. No, the CBF comes right out and says it is concerned about air quality.

According to The Virginia Mercury’s reporting, Department of Environmental Quality Air Division head Mike Dowd told the board that beyond 300 meters from the proposed site, “there is no discernible impact in air quality.” Summarized the Mercury:

“The proposed facility would have been one of the most stringently controlled natural gas compressor stations in the United States,” Shawn Day, a pipeline spokesperson, wrote in an email. “The board’s decision is not supported by the factual evidence and the rigorous examination presented by MVP Southgate, an independent consultant, and DEQ staff which demonstrated that the project’s advanced design would have no adverse impacts on public health.”

Bacon’s bottom line: We can look forward to Virginia’s governor-elect, Glenn Youngkin, replacing the environmental zealots on the Air Pollution Control Board. But what is to be done about the CBF?

If you donate to the CBF, make good and sure you’re on board with its new priorities, which reflect the values of White environmentalist activists for whom “environmental justice” is merely a useful ploy to advance their real goal of shutting down the carbon economy.

Update: The Virginia Mercury reports that the Board vote was 5 to 2, not 6 to 1 as the CBF press release had said.

This entry was posted in Environment, Regulation and tagged James A. Bacon. Bookmark the permalink.