Why Government Bailouts Aren’t All Bad 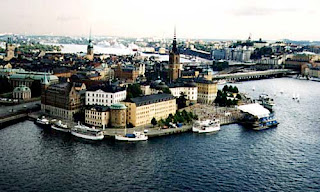 There’s been quite a bit of spirited debate on the Rebellion about bailouts and federal debt, much of it inspired by Jim Bacon’s new book on the financial problems Baby Boomers will face.
In the heat of discussions, however, it seems that some key points are being lost.
As bad as government bailouts are, they often actually work. Governments can be a lender of last resort, loan money that buys time for repairs and then it is repaid. Life and the economy go on. It can’t be a long-term debt for the government since they are paid back.
There are plenty of examples around the world. One is in Sweden which fell into a severe financial crisis in the late 1980s. True Sweden has a lot more social programs than the U.S., making it quite different. The financial crisis had to deal with some complicated government borrowings related to the Swedish krona. One compex issue affecting the country’s currency was how West Germany managed merging its currency with that of East Germany which it was absorbing after the Sovit Bloc failed.
During the crisis, two of Sweden’s six largest banks, Forsta Sparbanken and Nordbanken, could no longer meet capital requirements required by Swedish regulations. Stockholm’s government bought Nordbanken and helped Forsta with loan guarantees. The government also picked up a failing bank, Gota Bank. The government ended up owning about 22 per cent of the country’s banking assets according to a report by the Cleveland Federal Reserve Bank.
Two asset management back, sort of “bad” banks, were set up to pick up the weakened banks’ bad loans, skirt regulations on a part-time basis, and inject equity in the troubled banks. They made it a gradual process to take pressure off short term prices. Within a half a decade, the country’s economy picked up sharply and most of the liquidations had been sorted through at a lower cost than originally fared. Crisis over.
Looking at the U.S.’s devastated economy, one can see signs of progress. Many folks hated the Troubled Asset Management Program (TARP) which spent nearly $800 billion buying up bad assets and injecting public capital into banks to prop them up in the short term. We will be celebrating the second anniversary of TARP this month.
So what’s happened since? A number of high flying banks have actually repaid their TARP money, according to Pro Publica. American Express returned $3.3 billion on June 9, 2009. Bank of America paid back $45 billion on Dec. 9, 2009. Goldman Sachs paid back $10 billion on June 9, 2009. On the same day, JPMorgan Chase paid back $25 billion.
To be sure, according to ProPublica, millions in warrants have to be sorted out. As part of the TARP deals, these give the U.S. government the right to buy bank equity at a set price. After the TARP loans are paid back, the warrants are either sold back to the company or auctioned off.
The point here is that when we all go running around with our adding machines figuring U.S. debt, one has to deduct the billions of TARP dollars that have already been paid back. I do not have a clear number to date. And as the Swedish example shows, sometimes a government can do the right thing by being a last-resort lender and a problem solver. It could very well be that Secretary of the Treasury Henry Paulson, followed by Timothy Geithner, and both George Bush and Barack Obama may have prevented a truly awful recession turn into the Second Great Depression.
We won’t know for some years if this was the case. In the meantime, let’s watch that deficit hysteria.
Peter Galuszka