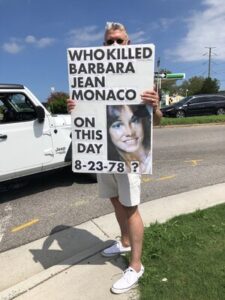 I was alone in the newsroom on that August day in 1985. It was lunchtime and the editor’s phone was ringing incessantly.

“Dougherty. Virginian-Pilot, Ledger-Star,” I said, reciting the five-word greeting I always used because I thought it made me sound like a hard-nosed reporter.

“Hello,” began a polite woman on the other end of the phone. “My name is Pauline Monaco. I was wondering if the newspaper would consider writing another story about my daughter, Barbara Jean. She disappeared in Virginia Beach seven years ago. Your newspaper wrote a lot about her at the time.”

I’d arrived at The Pilot just the summer before that fateful call. I’d never heard of this Monaco girl. I promised her mom I’d dig out the files and get back to her.

Within a few hours of poring over yellowed clips and staring at the face of a cute teenager I had a new goal: I wanted to find out who killed this 18-year-old from Connecticut.

Here’s what we know about the case: Barbara Jean, her older sister and a friend drove to Virginia Beach from Derby, CT and checked into the old Aloha Motel on 15th Street on August 20th.

They did what young people always do in a beach resort: They hit the sand during the day, they hit the clubs at night.

On August 23rd Barbara Jean had a late-night (actually early morning) date with a bartender at Peabody’s on 21st Street. Yep, that place was just as popular in 1978 as it is today.

She set out on foot alone from the Aloha to walk the six blocks to the club.

Along the way she vanished.

Of course people don’t just disappear. Witnesses saw her get into a station wagon that already held four or five men. Police believe these were local guys she’d met earlier in the week. They drove her to a cottage next to a pond near Oceana NAS where she was gang-raped and murdered.

Since the start of the investigation the police have had a handful of local guys on their radar. The cops believe they were with her on the night she died. They were deceptive on lie detector tests in 1978. They’ve kept silent for 42 years.

Ten months after Barbara Jean’s disappearance an informant came forward with details about the murder, but the prosecutor refused to grant him immunity in exchange for his testimony.

That was a critical mistake. The case went cold after that.

Back in 2001, one of the men who was in the car that picked up Barbara Jean talked to the cold case detectives. Jimbo Moore, admitted he was with her on the night before she died and gave the police details about her clothing that they’d never released to the public. He promised to come back and tell the detectives everything he knew.

Instead, he went home and ran a hose from the exhaust pipe on his truck to the cab. He died on the eve of the 23rd anniversary of Barbara Jean’s death.

Another man considered part of the Monaco case died of cancer recently.

The others are still out there.

Virginia Beach detectives haven’t given up. They’ve made a compelling video about the Monaco case that will debut Sunday. You’ll be able to find it on the Virginia Beach Police Department’s Cold Case Facebook page. Or you can check back here. We’ll have a link once it’s live.

Barbara Jean Monaco would be 60 if she were alive today. Older than her parents when she was killed. Her father died several years ago. Her mom is 89. Pauline Monaco already has her marker in the cemetery. It says she was “The mother of Barbara Jean Monaco.”

Others remember her, too.

On Monday, a friend breathlessly phoned to tell me to get to the intersection of Laskin and First Colonial Road.

“There’s a guy with a sign asking who killed Barbara Jean!”

I was headed in a different direction but I made a U-turn, sped to that corner and parked in the Walgreen’s lot.

“Hi. I’m Kerry Dougherty, mind if I ask you a few questions,” I said, as I approached, flipping open a notebook.

“I wondered when you’d come,” he replied coolly.

The man with the homemade sign said he’d read my stories in the newspaper for years and was outraged that someone got away with murder in his hometown. He said he’d been at that busy intersection with that same sign every August for years.

No, he never got any new information. Nope, no one else had ever even stopped to talk to him. No, he didn’t want his name made public.

“I figure someone driving by might know what happened to her,” he said. “Maybe they’ll finally talk to the police.”

Someone knows who killed Barbara Jean Monaco. There is no statute of limitations on murder.

If you have information about her slaying you know what you should do.