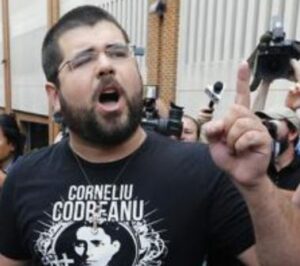 Mathew Heimbach in front of the Charlottesville courthouse in 2017. Photo credit: AP

The mainstream media portrays white supremacists as an ever-present danger to the republic, and heavy hitters from the New York Times to the Washington Post gave the trial of White nationalist leaders in Charlottesville daily coverage. At last an article has been published that portrays the racists as the broke, pathetic — dare I say “marginalized” — losers that they are.

The Associated Press says that the nine people who sued the organizers of the United the Right rally in 2017 might have won a $26 million judgment, but they aren’t likely to collect much. As the article states, “Most of the defendants claim they will never have the money needed to pay off the judgments against them.”

“I have no assets. I have no property. You can’t get blood from a stone,” said Matthew Heimbach, co-founder of the Traditionalist Worker Party. Heimbach is a single father to two young sons, works at a factory and lives paycheck to paycheck. The plaintiffs, he said, “just wasted $20 million to try and play Whac-a-Mole.”

Richard Spencer, who popularized the term “alt-right” to describe the gaggle of Klansmen, neo-Nazis and other far-right extremists, now says he views the group as a “totally dysfunctional institution with dysfunctional people.” Which it is.

An attorney for the plaintiffs acknowledged that some of the 17 defendants are “locked up or destitute.” Many have been booted off social media platforms, and some have turned on one another. As the AP article notes, “the movement began to crumble amid a flurry of litigation and in-fighting among leaders.”

The groups that sued the White supremacists aren’t going to cut them any slack, though. Amy Spitalnick, executive director of Integrity First for America, a civil rights nonprofit that funded the lawsuit, said the group is “committed to ensuring our plaintiffs can collect on these judgments and see the full accountability they deserve.”

Spitalnick’s group has ample resources to pursue broke White supremacist losers to their graves. Its 2019 990 form says the nonprofit had $1,970,000 in revenue that year, and Spitalnick herself earned $200,000 in compensation.

Meanwhile, I wonder whatever happened to the Antifa-types who participated in the riot. It’s not as if the White supremacists were shadow boxing. They were mixing it up with armed thugs on the Left. You don’t hear much about those guys. I don’t recall seeing any accounts of radical leftists getting sued or charged. Were charges pressed against any of them, or are there no lawbreakers on the far Left, only the far Right?

The Alt Right movement may be running on fumes, but we can expect to see continued coverage from the mainstream media. The MSM needs to elevate the visibility of right-wing lunatics so they have something with which to tar conservatives. Toward the end of its coverage of the trial, the New York Times made the case that the Alt-Right may be a spent force, but its ideas have infiltrated mainstream conservatism. Yeah, right. Parents upset about COVID shutdowns in schools, pornography on bookshelves, and educators telling White children that they are inherently racist are just an ideological hop, skip and jump away from being White supremacists themselves!

Conservatives may say we detest White supremacists, we may say we’re glad the Alt-Right movement ran into a ditch. But who the hell are we to say what we think? The NY Times‘ Alan Feuer knows us better than we know ourselves.