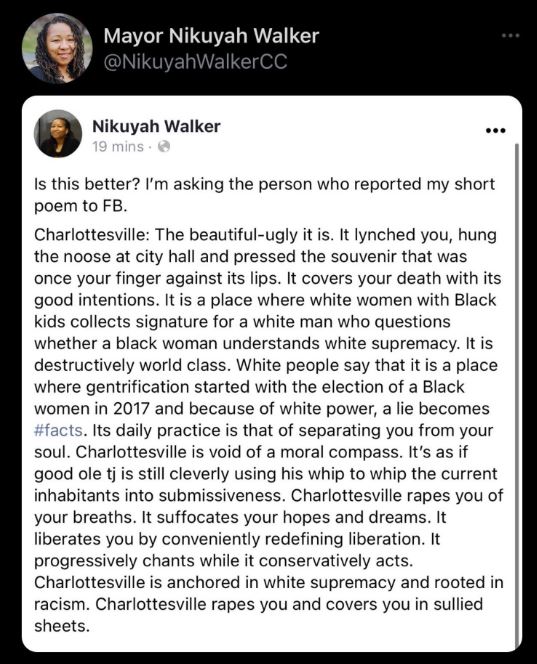 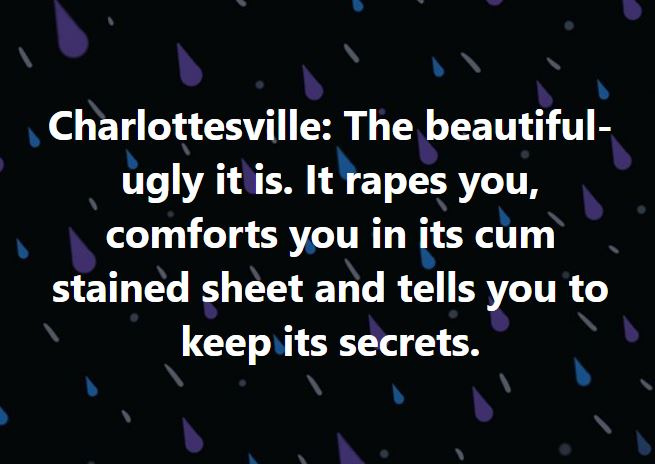 The mayor attended Charlottesville city schools and earned a B.A. in Political Science from Virginia Commonwealth University in 2004. Elected to City Council in 2017, she was the top vote getter among six candidates. Her city profile page says that she has “spent most of her adult life serving those most oppressed and neglected in this community.” Her primary goal upon being elected to City Council was to “help create a city that deserves its World Class designation.”

Poor white Charlottesville residents.  She surely won a significant percentage of the white vote — she garnered 29% of the total, while African Americans comprise only 19% of the population. How must they feel to know Walker scorns them so?

No one should be surprised by Walker’s rhetoric. The city marinates in the stew of Critical Race Theory so prevalent at the University of Virginia: a toxic ideology that fosters racial grievance, resentment and hate. According to CRT, all white people are privileged, almost all are racist, and even those who profess sympathy in the fight against racism are deemed cloyingly obnoxious or ignorantly insulting. White liberals and progressives may think they’re anti-racist, but most are Klansmen cloaked in progressive rhetoric.

Someone reported Walker’s post to Facebook, which reportedly instituted a ban. She clarified and expanded upon her original post, eliminating the reference to “cum-stained sheets.” But the “poem,” as she alluded to it, has re-appeared on her Facebook page.

It’s amazing, isn’t it, how the more progressive a community is — Charlottesville voted 86% for Biden in 2020, 13% for Trump — the more racial animosity there is. It’s almost as if radical Leftism breeds hate.

Perhaps Walker’s ire at Charlottesville’s white supremacists was piqued by reports that she had spent city money to purchase $25 gift cards which, she says, were intended to compensate people for city meetings. Acting City Attorney Lisa Robertson, who is white, had written a memo to other council members accusing Walker of misusing city funds.

Walker can count her blessings in one way. At least she isn’t Amanda Chase, who had her entire Facebook account shut down.

Update: A fellow by the name of Mark Reynolds has started a recall petition.

This entry was posted in Culture wars, Politics, Race and race relations and tagged James A. Bacon. Bookmark the permalink.