Atif Qarni, Virginia’s secretary of education, urges people to fight systemic racism and injustice in U.S. society. Addressing local elected officials, he said in June, “You have significant power to dismantle systems of oppression that may include policies, practices, or processes that negatively impact the lives of Black people or people of color. This may seem like a daunting task, but the first step is actually a simple one. Look at your budget. Your budget reflects your values and where you are investing your resources.”

Taking Qarni’s counsel to heart, I have been looking at Virginia educational spending — drawing upon the Virginia Department of Education’s newly published school quality profiles. So far, I have found no evidence whatsoever of budgetary priorities that disfavor blacks. To the contrary, I found that black students in Henrico County benefit on average from greater funding. Disparities might exist elsewhere — there are 133 school districts in Virginia — but I have not yet found any.

Today, I take a look at the City of Alexandria school system. Alexandria is notable for dedicating spending per-pupil far in excess of the state average — $17,077 per student in 2019-20 compared to $11,560 statewide. As seen in the graph above, there is little difference between dollars allocated to black, Hispanic and Asian in the city’s 14 elementary schools, but whites receive $400 to $500 less on average.

If a “system of oppression” exists in Alexandria, it’s a system that steers more money to schools where “people of color” — mostly blacks and Hispanics — predominate than to schools with larger percentages of white students.

There is a similar spending differential between white and non-white students in the city’s two middle schools, as seen here: 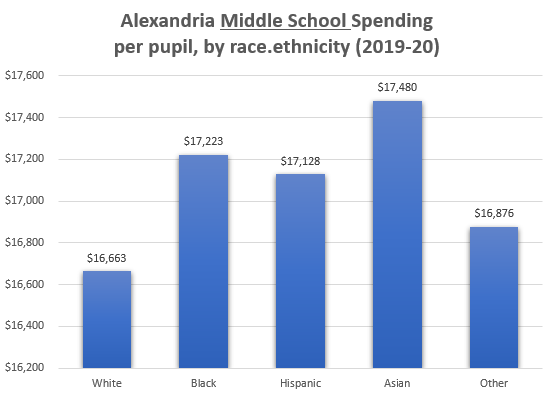 There is no spending differential for high school students because Alexandria has only one high school.

Here’s a question for Mr. Qarni: How much money needs to be spent to dismantle the “systems of oppression” in Virginia schools? Alexandria spends 47.7% more per pupil than the state average. Even after adjusting for regional differences in salaries and cost of living, that’s still a significant premium.

The Alexandria school system is committed to inclusion and diversity. In 2017, a Diversity and Inclusivity Strategic Planning Committee was formed to identify key action steps to build cultural competence, ensure that the curriculum and instruction includes “multiple perspectives, cultures, and backgrounds,” and “reflect on where bias and lack of awareness may be adversely affecting our efforts.”

Despite all this, white students in Alexandria public schools surpassed their white peers statewide in SOL mathematics pass rates in 2018-19 by a single percentage point — 89% compared to 88%.

Hispanics under-performed their Hispanic peers statewide by 15 percentage points — 59% to 74%.

Even Asian students under-performed their peers statewide by 16 percentage points — 78% to 94%.

Disparities in statewide comparisons were similarly awful for science, but more mixed for reading, writing and history.

Perhaps there is some other explanation for these disparities than an unequal distribution of resources and insufficient wokeness.

Qarni makes a lot of broad, sweeping generalizations about inequities and injustices in Virginia, but he offers nothing to back them up with. I mean nothing. Showing commendable transparency, the Virginia Department of Education has reported voluminous data, but Qarni appears to have made no use of it whatsoever. But when you’re woke, who needs data? The Narrative rules all.