Where Does It End? 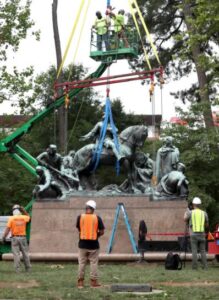 by James A. bacon

The city of Charlottesville took down its Robert E. Lee and Stonewall Jackson statues in Charlottesville from their plinths over the weekend. But the purging of Virginia’s past went far beyond the excising of Civil War generals from the public square.

The statue of Governor Harry F. Byrd, a segregationist and architect of the mid-20th century Byrd machine, was removed from Capitol Square in Richmond four days ago. And statues erected to honor Meriwether Lewis, William Clark, and Sacagawea as well as George Rogers Clark (a different Clark) were taken from their Charlottesville perches on the grounds that that some native Americans deemed the portrayal of Indians as offensive.

So, where does it end? The extirpation of politically incorrect statues and memorials started with Civil War generals because it could be argued that they were traitors to the United States who battled to uphold slavery. It was but a small step to purge anyone, even conscripted soldiers, who fought for the Confederacy. And then to anyone who owned a slave, and the another to anyone associated with segregation. And then to anyone associated with the conquest of native Americans.

The appetites of the ideological left will never be satiated. Patrick Henry, who declared, “Give me liberty or give me death,” has already been targeted for removal from the name of a Martinsville community college. When each memorial tumbles, progressives move on to the next. Does anyone doubt that the logic of events will end with Henry? How long until Thomas Jefferson — already attacked as a slave-owning rapist — George Mason, and George Washington are next?

When will the silent majority say enough is enough? When do we say that Civil War generals were one thing, but we draw a line with the founding fathers? When do we draw a line with those who articulated and implemented the principles upon which our nation and society were founded? When will we say that taking down the founders’ memorials amounts to de-legitimizing and undermining our constitutional republic with all its frustrating checks and balances against tyranny?

The United States was conceived in sin when it imported African slaves in 1619, the political progressives tell us. Guess what, the whole friggin’ world was immersed in sin in 1619! Aside from a handful of hunter-gatherers in the Arctic, the desert, and the rain forest, every society on the face of the planet was ruled by monarchs, emperors and despots who presided over deeply hierarchical societies — many of them based on slavery. The conditions of subjugation between serfs, peasants and slaves differed only in their details. Cruelty and exploitation were the universal condition of mankind.

The question we should ask is how did the world arise from that muck? Where did the principles of universal human rights come from? And how did those principles come — in some countries, but not others — to be applied to everyone, perhaps imperfectly but with a striving to reach perfection? Can we not honor those individuals who advanced the cause of democratic, republican government that protects minority rights, even if they fell short of the modern-day ideal?

To borrow a cheesy football metaphor, can we not honor those who moved the ball down the field as well as those who spike the ball in the end zone?

If we cannot, whom do we honor? Anyone at all?