When Nobody Was Looking, Virginia Developed a Thriving Medical Device Industry 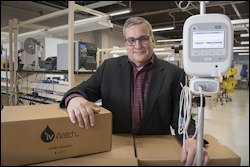 Virginia business boosters have long fanned fantasies that the state might join the ranks of the nation’s biotech industry leaders. There isn’t much chance of Virginia becoming a center of pharmaceutical commercialization — an industry in which the required expertise is highly concentrated geographically — but there may be hope for medical devices.

The medical device industry encompasses a more diverse array of products than is found in the pharmaceutical industry, and the expertise required to commercialize medical devices is less concentrated. Indeed, much of the nation’s expertise in the field resides in Virginia, which is home to two of three three largest medical device distributors — Owens & Minor, and McKesson.

A key factor is that medical devices can be developed at considerably less cost than pharmaceuticals, and, although they still require Federal Drug Administration approval, the process is less tortuous and expensive, hence entails less risk. Someone with a good idea can develop a product without tens of millions of dollars of venture funding. Writes Virginia Business:

Virginia might not rank among “overall high-power biomedical hubs like Boston and San Francisco,” he notes, but the state exemplifies “a dispersed proliferation of innovation, startups and university research” that has been brought about by changes in science, technology and medicine. …

Gallagher, who will step down as head of Virginia Bio later this year, says one reason for the growth of medical device and technology companies is that they are seen by some investors as having a lower level of risk compared with drug developers.

Generally, creating a device takes less time than developing a drug, which can involve “the most brilliant people in the world who have all the right data,” Gallagher says.

This entry was posted in Economic development, Entrepreneurialism and tagged James A. Bacon. Bookmark the permalink.