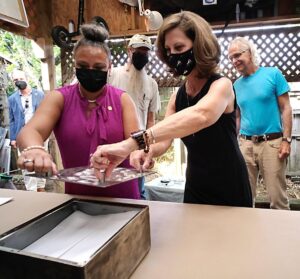 According to a news release from the Governor’s office, these are the items:

The items placed in the time capsule were chosen by a committee comprised of “historians from the Richmond region’s leading historical and cultural museums and members of Governor Northam’s cabinet.“ Given the makeup of the committee, it is not surprising that many of the items were suggested by Governor Northam, First Lady Pam Northam, or components of the Office of the Governor.

The overall scope of the items is obviously narrow. I would have preferred a broader sampling of Richmond and Virginia society. However, in the official document that will be included in the time capsule, the Governor made his intent clear:

“The creation of this new capsule is a response to the Virginia represented in the old capsule, which promoted Lost Cause mythology and only represented the stories and experiences of a small segment of society. It is also a representation of the Virginia today, one rooted in our values of inclusion, equity, and diversity. The items selected were chosen to tell the stories of courageous groups who fought for a more equitable, diverse, and inclusive society, while honestly portraying the work that still remains. This means that the capsule focuses on the story of race in Richmond, but also represents the incredible diversity of Virginia and the path forward as we address historic justice in the Commonwealth.”

One problem with this statement: As of around noon today, work crews still had not found the old capsule.

This entry was posted in Culture wars, Race and race relations, Virginia history and tagged Dick Hall-Sizemore. Bookmark the permalink.