What Higher-Ed Reformers Are Up Against 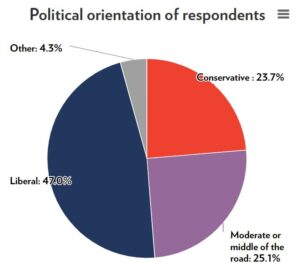 The incoming Youngkin administration didn’t campaign on reforming “woke” public colleges and universities in Virginia, but I am getting plenty of signals that pushing back against the leftist indoctrination and conformity on campus follows close behind fixing Virginia’s public schools as a priority.

The first step will be appointing board members sympathetic to conservative goals. Youngkin hasn’t talked much publicly about how he would define his objectives. But he needs to give this careful thought. If he aims to convert the University of Virginia, Virginia Tech, and other state institutions into secular versions of Liberty University or Regent University, he will fail spectacularly. If he sets an agenda that appeals to a broad range of the ideological spectrum, he stands a good chance of succeeding.

The first thing to consider is that Virginia’s public universities are dominated by the left and are becoming intolerant intellectual mono-cultures as the baby boomer generation of scholars, which leaned liberal but included many moderates and conservatives, retires. On college campuses today, faculty members are almost all shades of blue, administrators are shades of blue, and  the most vocal students who dominate the campus culture are shades of blue. Red-hued Boards of Visitors will meet furious resistance if they adopt ham-handed tactics.

Crucial players in the struggle for the soul of higher ed will be the alumni. They have contacts, they have the power to identify and publicize issues, and they have leverage through their power to withhold donations and bequests. Indeed, conservative alumni around the country are organizing in reaction to the Wokeism at their alma maters, as we have seen at the University of Virginia, the Virginia Military Institute, Washington & Lee University and elsewhere.

The University of Virginia Alumni Association has just published the results of an extensive poll of its alumni, gauging attitudes on matters ranging from Thomas Jefferson to the Honor Code to Greek Life. The poll asked alumni their political orientation. The pie chart atop this post shows the results: fewer than one-quarter describe themselves as conservative, and a quarter as moderate or middle-of-the-road. Nearly half called themselves liberal, and 4% as “other.” (Whether they deem themselves libertarians or Marxists, I don’t know.) 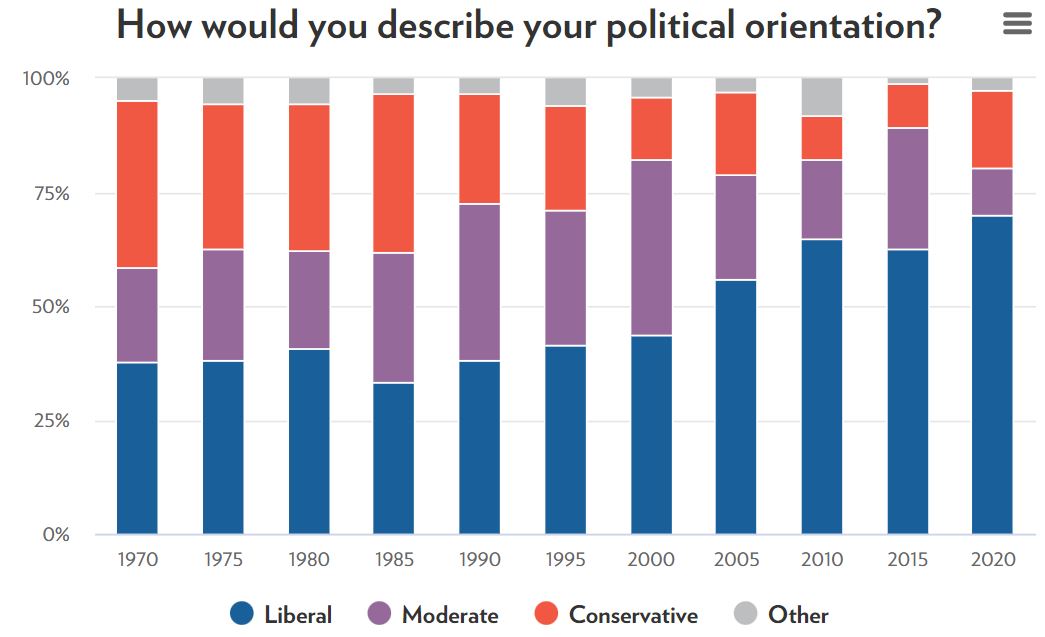 As seen in the graph above, younger alumni are strongly liberal. Even old-geezer alumni like myself (class of ’75) are evenly divided between liberal and conservative. For every conservative alumnus willing to pull the plug on his donation, there is a liberal willing to double down on his gift.

While the details will vary, I expect a similar pattern prevails at every other higher-ed institution.

If Youngkin wants to transform the culture of higher-ed in Virginia, his Board of Visitor appointments will need help from legislators, the public and, most of all, alumni. If zealous culture warriors swoop in with the goal of X’ing out such-and-such class on feminist dialectics or Critical Race Theory, they will slam into an ivied wall. The Youngkin cohort of board appointees will need to define a vision that appeals to moderates and, yes, even liberals.

That’s not an impossible task. Liberal faculty include many professors who have strong political beliefs but view their role as teaching students, not indoctrinating them. Liberal faculty members increasingly run afoul of the ever-morphing canon of political correctness; many have been cowed into silence, but don’t like it. Some liberal alumni are in denial about what’s happening — incidents receive little publicity — but others acknowledge it. (Read Bari Weiss’ Substack column for proof.) The trick for Youngkin-appointed board members and their alumni allies will be to focus on issues they have in common with moderates and old-school liberals: (1) freedom of speech, expression and inquiry; (2) upholding standards of academic excellence; and (3) intellectual diversity. They have to articulate these goals in a way that cannot be maligned by the far left as racist dog whistles or veiled forms of “White supremacy.”

The struggle for the soul of higher-ed is the task of a generation, maybe two. Universities didn’t become enclaves of intellectual intolerance and conformity overnight, and they won’t be restored as bastions of free and open thought in a single gubernatorial administration. Nothing is accomplished by making empty noise and sparking a backlash. Politically, Virginia is still tinted blue. Republicans and conservatives may not get another whack at this. We must get it right.

This entry was posted in Education (higher ed), Governance and tagged James A. Bacon, University of Virginia. Bookmark the permalink.