What Cox Brings to the Contest for Governor 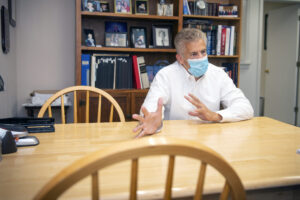 Chesterfield Observer photo from a September interview, which you can read here.

Virginia’s 66th House District, basically Colonial Heights and part of Chesterfield County, was drawn by a federal court special master. The incumbent delegate, Republican Speaker of the House Kirk Cox, was not supposed to survive the 2019 election based on past partisan performance in those precincts.

Being Governor is better than being Speaker. The effort to gerrymander George Allen out of Congress led to his term as Governor two years later. If a play works, wait a while and run it again. Only a Republican who can get beyond the hard core base – as Cox did in 2019 — has a prayer. Just improving the outcomes in nearby Chesterfield and Henrico counties, his back yard, would set the stage.

Any Republican faces daunting numbers. Donald J. Trump just lost the state by 450,000 votes, a full 10-point spread. Gillespie lost to Democrat Ralph Northam by just under 9 points and 230,000 votes. If you-know-who is not in the White House next year, which is how it now stands, Democrats have lost their best “get out the vote” magnet.

Cox made his “announcement by website” overnight, with  embargoed media interviews appearing today and the now-standard campaign video (watch it here). If this reads a bit like an endorsement, I won’t argue with that. I speak only for myself in this regard.

Let’s put some cards on the table. I met Kirk in 1985, when I was covering the Wyatt Durrette for Governor campaign and Kirk was Wyatt’s driver. The Colonial Heights connection was discovered, as by that time my parents had settled in there for their retirement. Then Kirk ran for the House in 1989 while I was GOP Caucus Executive Director. I cannot be objective with regard to Cox and don’t claim to be.

Chesterfield Senator Amanda Chase has been actively seeking the nomination for months, and media reports and rumors have swirled around other names.  The nomination deadline is June 9, and step one for the party is to settle on the method. I cannot claim to be neutral on that either: It needs to be a primary, the process of inclusion rather than exclusion, expansion rather than contraction.

The divisions which have pressured the party into opposing ideological corners have been inflamed, not reduced in the wake of November 3. The same divisions are reflected in the House GOP Caucus, which chose Kirk first as majority leader and then as Speaker. He has shot those rapids before.

Success in the legislature is always a two-edged sword. With fifteen sessions behind him, Cox has plenty of votes, compromises and issue stances that will become fodder for Republican foes seeking to taint him as not conservative enough, and then Democrats doing their best to paint him a wing nut.

But here is a big thing which has changed: The Democratic nominee, any of their choices, no longer can run behind the myth that “Virginia Democrats are different.” The uber-woke, big labor, Green New Deal agenda pushed during two 2020 sessions splintered that illusion for good.

From some of his initial written materials:

Chasing the nomination: “…I cannot watch the Virginia we’ve built slip away. The timeless principles upon which our representative democracy were built are under attack, unchecked one-party Democratic control in Richmond is tearing our state apart, and people feel like their leaders are not listening….We have to fight back against the cancel culture and the elitism, against misguided collectivist policies, and a worldview that puts the government in charge of every facet of our lives.”

With an eye on November: “But we are not just fighting back for the sake of it. We are fighting back so we can lead forward out of this pandemic and a self-inflicted recession, lead forward to an economy where people can do more than just pay the bills, back to a place where problems are solved through dialogue and communication, and lead forward to a Virginia that is the best place to do business, where our kids leave school with an affordable degree or a valuable credential, and where people in government do what they say they’re going to do.”

In a brief interview Friday, Cox indicated he really hadn’t decided to do this until he saw the new Democratic majority in action during the 2020 session. He came to the House in the minority, but under a different breed of Virginia Democrat. The partisanship then didn’t prevent cooperation and compromise. The opacity, insularity and arrogance of this new House majority has been their mistake and the Republicans’ opportunity.

Having seen the process work both well and badly, having been at the political bottom and on top, there is reason to hope Cox will follow through on changing the tone and restoring some mutual respect to Richmond.

And there is one timely issue I think Cox is perfectly prepared to address. Rebuilding Virginia’s schools in the wake of the pandemic shutdowns and disastrous virtual learning experiment will be at the top of the next governor’s to-do list. Cox spent his career as a front line classroom teacher in the public schools.

Keeping the unruly focused on the mission is what good teachers (and House Speakers and even Governors) do.