We’ve Been Good, Governor. Ease Up on Virginia Beach. 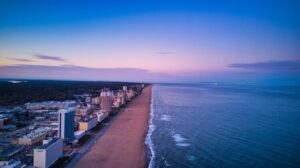 That’s how long cities in Tidewater were able to enjoy the freedoms granted to us by our munificent governor when he graciously allowed us to move from COVID Phase 2 to Phase 3 on July 1.

By July 28th Gov. Ralph Northam yanked some – but not all – of those privileges away from those of us living in Southeastern Virginia.

COVID-19 cases were up, as were our positivity percentages. So we were punished. No liquor could be served — or consumed — after 10 p.m. in restaurants, and eating establishments had to close at midnight.

Because everyone knows that a margarita at 10:15 makes you vulnerable to COVID-19.

While the rest of the commonwealth could gather in groups of 250, we were limited to 50.

Now, 30 days later, Virginia Beach has turned things around. The metric most cited by officials to gauge the spread of COVID-19 — the positivity percentage — has dropped at the Beach from 11.8 % to 6%.

Time to loosen the grip on Virginia Beach.

Look, the seven-day positivity rate is a curious measure. It means that 94% of people being tested in Virginia Beach for the coronavirus don’t have it.

If, however, folks heed the latest recommendations from the CDC, which say if you don’t have symptoms, don’t get tested, our rates — and rates everywhere — may climb.

So we need action now from the governor.

Besides, Labor Day weekend is fast approaching. This summer has been a tough one for our beach resort. We lost big money-making weekends: the Shamrock Marathon, The Something In The Water Festival, Memorial Day Patriotic Festival, the Boardwalk Art Show, the Fourth of July fireworks and next month we’ll miss the annual Neptune Festival.

Not to mention all the concerts that were cancelled as the Virginia Beach Amphitheater sat empty.

Due to swift action by the city council that curbed spending, the city is solvent, although revenues are $7.6 million lower than budgeted, according to The Virginian-Pilot.

That doesn’t tell the whole story, of course. Restaurateurs and hoteliers are hurting. Ordering restaurants to get the alcohol off tables by 10 is not helping. Limiting gatherings to 50 means weddings are on hold again and so are funerals.

Other cities in Tidewater have higher positivity percentages than the Beach. Norfolk, for instance is at 8%. Portsmouth at 12.4% and Chesapeake is at 11.1%.

Too bad for them. They shouldn’t hold back the Beach.

In the past, the governor didn’t hesitate to go city by city with his rules. In May, for instance, he allowed the beaches in Virginia Beach to open, while Norfolk’s remained closed.

No matter what that crank from Forbes wrote, looks like we’ve been well-behaved in the Resort City.

When I talked to Mayor Bobby Dyer last night he said he was preparing a formal request to ask the governor to ease restrictions.

“We all know the collateral damage of confinement,” Dyer said. “Look at the increase in depression, suicide and domestic abuse. The best thing people can do is come to the beach with their families to relax, swim in the ocean, walk on the sand and eat in our restaurants.

When the mayor’s right, he’s right.

Time to ease up on Virginia Beach, Governor.

This column is reprinted with permission from Kerry: Unemployed & Unedited.

This entry was posted in Regulation and tagged COVID-19, Kerry Dougherty. Bookmark the permalink.

2 responses to “We’ve Been Good, Governor. Ease Up on Virginia Beach.”