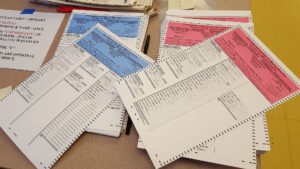 by Michael Fruitman and Jim McCarthy

Other than the continued inanity of conspiracy theorists and theories about the theft of the 2020 presidential election, we may be grateful in this post-Thanksgiving moment that our ballots in that contest mattered and prevailed.

Virginia turnout was 75% of registered voters (4.375 million). The Democrat garnered 2.413 million votes and the Republican 1.962 million, the largest and most significant result in the Commonwealth’s history and testimony to the vitality of citizen participation in the electoral process.

Nationally, the results were not dissimilar to those in Virginia, with 81.3 million popular votes for the Democrat and 74.2 million for the Republican. However, for a small handful of voters who happened to be members of the U.S. Congress, the popular results were not acceptable. On January 6, 2021, and into the early morning of the 7th, members of Congress conducted another vote to overturn the popular results by legislation, rejecting the Electoral College vote count.

One hundred forty-seven Republican members of Congress voted to reject the Electoral College voting. Four of those so voting were among the eleven representing the Virginia congressional delegation (36% of the total representing the state). In effect, the four voted to nullify the votes of the four million-plus citizens of their home state.

Ben Cline, Morgan Griffith, Robert Wittman, and Bob Good will be on the ballot in November 2022. It is likely their hope and strategy that the voters of 2020 will have forgotten or forgiven them for their decision to toss votes in favor of an unfounded allegation of a stolen election. However, their attempt to nullify their constituents’ votes was no mere symbolic gesture. And even if that gesture was intended to be symbolic, the danger posed to democracy was not symbolic, as the attack on the Capitol on January 6 demonstrated.

As the nation and Virginia transition from the events of January 6th and move from this Thanksgiving to the next in 2022, gratitude and thanks are to be given to the good and common sense of millions of others, including members of Congress, who withstood the efforts of a handful to corrupt a democratic process centuries in the making.

There are some signs that the electorate is not nearly as largely populated with sheeple as the politicians who represent them. The distance between November 2020 and 2022 is only two years, not two decades. It is difficult to imagine that the campaigns of the four Virginia representatives will occur without questions and challenges from opponents (perhaps even primary opponents) concerning their attempt to nullify the vote of their own electorates in 2020.

Justifying the vote to reject the Electoral College results is hardly a partisan issue since the intent was universal with respect to each and every vote in each and every state. Those who voted to reject might have been successful had they attained a simple majority in Congress to nullify 155 million popular votes. The successful exercise of that power to negate the express wishes of the nation’s electorate represents a type of oligarchic authoritarianism not dissimilar to current efforts within states to empower legislatures to declare electoral results unsatisfactory.

If the four Commonwealth Congressmen assert that their votes to overturn the Presidential election was mere partisan politicking, then they clearly failed their civics courses. None qualify as a profile in courage. The substance of their legislative behavior was nothing less than a coup d’etat. In some countries, there would be harsh, even fatal, consequences.

With less than one year to Election Day 2022, Cline, Griffith, Wittman, and Good will undertake campaigns to convince Virginians of their qualifications for office and reasons to be elected. In addition, Virginia’s congressional elections will be subject to revised boundary lines to be drawn by the state Supreme Court in a few months. Whether their vote to nullify constituent voting in 2020 plays any role in their failure or success remains in the hands of those very same voters, the likely majority of whom voted in 2020. We expect to stay tuned to this particular issue.

Michael Fruitman and Jim McCarthy are co-editors of www.VoxFairfax.com.

This entry was posted in Elections and tagged Guest contributors. Bookmark the permalink.