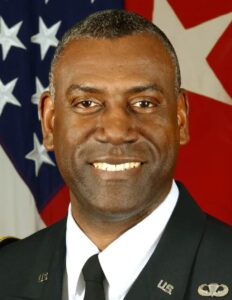 The Virginia Military Institute has appointed retired Army Maj. Gen. Cedric T. Wins, an African-American, as interim superintendent. He will serve while the Board of Visitors searches for a permanent replacement for retired Gen. J.H. Binford Peay III, who resigned after Governor Ralph Northam announced an investigation into charges of “relentless racism” at the military academy.

You can read a straight news story about the appointment in the Richmond Times-Dispatch here.

You can read a jaundiced joke of a “news” story about the appointment by so-called “reporter” Ian Shapira in the Washington Post here.

First a few facts about Wins…. He graduated from VMI in 1985, sixteen years after the military academic was desegregated, and spent 34 years in the Army. Son of an Army veteran and police officer, Wins, now 57, attended VMI on a basketball scholarship and starred as a shooting guard. He remains on the team’s top all-five scorer’s list. After earning a degree in economics, he was required to serve three years in the Army. As the RTD recounts, although he had never intended to make the Army career, the Army kept presenting him with opportunities, and he kept on taking them. His final post before retirement was commander of the U.S. Army Combat Capabilities Development Command, the Army’s largest technology developer.

Among the more interesting revelations Wins made in an interview with RTD reporter (no quote marks required) Eric Kolenich: Although he did hear derogatory racial comments from opposing fans during basketball games, he said, he never experienced racism at VMI.

That fact never appears in Shapira’s story, in which he recaps allegations he dredged up in previous articles. Shapira leads his story this way: “Under fierce attack over racism in its ranks, the Virginia Military Institute has appointed a Black man to lead the school. …”

In the third paragraph Shapira notes that Northam ordered an independent investigation of what the governor — in the frenzy generated by Shapira’s derogatory story — called “the clear and appalling culture of ongoing structural racism.”

Shapira allows three paragraphs to recount Wins’ background and provide quotes from an email he sent to VMI alumni. He then goes on to repackage allegations of racism from his previous articles.

By way of actual reporting, Shapira does quote Michael Purdy, a VMI graduate and attorney who campaigned to take down the Stonewall Jackson statue, and E. Sean Lanier, a VMI grad who Northam announced Friday will become VMI’s fourth black board member. Both Purdy and Lanier approved of Wins’ appointment.

Unlike Kolenich, Shapira did not interview Wins.

Here’s what he might have found out. Wins said that as society changes, so must VMI change. “Your have to periodically take a look at how things are going relative to the model that you have and the young men and women who come into VMI from various walks of life.”

The essence of VMI — its honor system, its regimental system, the rat line and barracks life — won’t be altered. Those elements of the school teach duty, discipline and attention to detail, he said, and they are why VMI has produced great leaders.

Wins expects to name an individual or a team of people to advise him and the board on the topic of inclusion. The board has laid out a list of initiatives that he has begun to study, and he says the school will face the independent investigation with full transparency. Wins wants to find out what works and what needs to be changed.

Note what Wins did not say or do. He did not endorse Shapira’s charge that VMI is a “relentlessly racist” institution. Like any prudent person would do, it appears that Wins will draw his own conclusions, which will be informed by the findings of the state investigation, which has been funded to the tune of $1 million. A report is due in June.

Clearly, Wins does not approach the job with the preconceived notions of Princeton pajama boy Ian Shapira, who shares the stereotypes and prejudices of the white elite that runs the Washington Post. With every article he posts, he digs himself deeper, committing himself to the narrative that VMI is a racist hell hole. I don’t know who will conduct the investigation or what the findings will be, but any query will have to be more comprehensive and balanced than Shapira’s agenda-driven scribblings.

This entry was posted in Culture wars, Education (higher ed), Media, Uncategorized and tagged James A. Bacon. Bookmark the permalink.