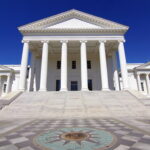 Get ready, Virginia. Bad things are brewing in Richmond.

On Friday, Gov. Ralph Northam announced that he was bringing the General Assembly back for a special session on August 18.

The mischief that the far-left majority — bankrolled by Michael Bloomberg — could get into should alarm every moderate Virginian.

There are only two topics that should be on the table for this extraordinary session:

1) How to plug the massive hole in the budget that occurred when Northam’s shutdowns wrecked the economy and 2) How to rein in a governor who used his emergency powers to take almost total control of the commonwealth in March and who seems determined to govern indefinitely by edict without legislative oversight.

That’s it. Everything else should wait until January for the regular session when the legislators have time to fully debate issues and most importantly, when the public has the opportunity to weigh in. Special sessions should be severely limited in scope and not an opportunity for lawmakers to ram through legislation that wouldn’t pass in less emotional times.

Northam and his pals in the state legislature seem determined to act while anti-law enforcement fever is burning bright. It brings to mind the saying: Act in haste, repent at leisure.

Here’s an alarming report of what Northam is planning from The Richmond Times-Dispatch:

“I look forward to bringing legislators back in session as we continue to navigate these unprecedented times,” Northam said Friday. “We have a unique opportunity to provide critical support to Virginians, invest strategically in our economic recovery, and make progress on policing and criminal justice reform.”

As protests over systemic racism and police brutality continue, Northam said he backs the efforts by House and Senate Democrats to tackle these issues this summer.

The Northam administration said in a statement Friday it expects to champion legislation “aimed at police accountability and oversight, use of force, increased training and education, and officer recruitment, hiring, and decertification.”

Yep, looks like Virginia’s Democrats are allowing the statue-toppling, paint-throwing mobs to dictate the agenda next month.

What Virginia needs right now is a measured plan to cope with the sharp drop in state revenue.

Instead, what Virginians are likely to get will be sloppy laws designed to appease the state’s cop-hating minority.