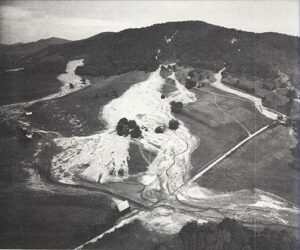 In response to my suggestion to use the Corps of Engineers to assess Virginia’s needs for hurricane and flood control, libertarian commenters on this blog used the argument that only oceanfront landowners will benefit.

That shows a fundamental misunderstanding of how the process works.  I ran into that same level of ignorance in the General Assembly.

No plan can defend everything everywhere, but a proper plan will do a cost-benefit analysis, and the USACE by law does that in every plan. Corps plans will protect what that its cost-benefit analysis indicates can be protected with a significant return on investment.   The value of people, disadvantaged communities, historically minority communities and areas of historical and ecological significance are counted in that assessment, not just property.

The Corps is a designated federal enforcer of environmental laws with regards to water and water related projects. They first will do everything they can with natural solutions before shifting to such construction projects as levies, pumps, seawalls, flood gates and berms.

The Corps uses a Regional Economic System (RECONS) model, which is a program used to assess the regional, state, and national impacts of projects. It is constantly assessed and updated.

Between 2010 and 2013, Corps of Engineers Civil Works projects reflected an average total net of $110 billion in National Economic Development benefits and $34 billion in returns to the U.S. Treasury. Each dollar invested in Civil Works generated about $16 in economic benefits and five dollars in U.S. Treasury revenues. Historically, the Civil Works budget is around $6 billion annually.

The often-cited corruption of city and county councils that favor developers without concern for environmental impact exists and needs to be addressed with considerable priority.

But one of the reasons for turning over the planning and execution of hurricane and flood control planning to USACE is because they cannot be bought.

This entry was posted in Economic development, Environment, Uncategorized. Bookmark the permalink.