Virginia’s Parole Board Frees Another Killer 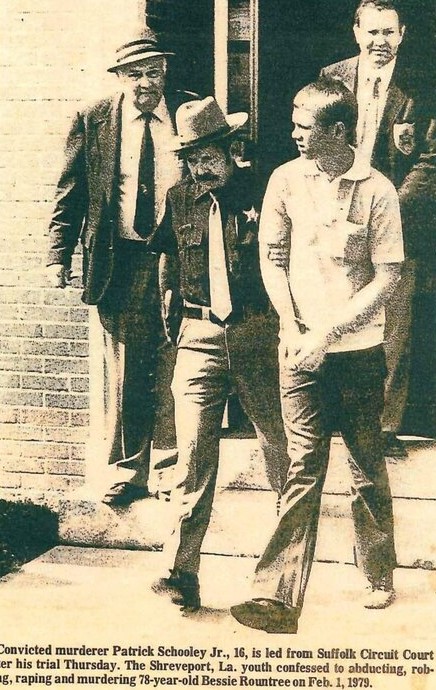 Well. They did it again.

Virginia’s Parole Board released another murderer. This may be the most psychotic killer yet.

And, no, these hairballs are not being released because of the COVID-19 virus. The Department of Corrections is freeing non-violent criminals nearing the end of their sentences. This is the soft-on-crime Parole Board setting killers loose. Because they can.

When Suffolk’s Commonwealth’s Attorney Phil Ferguson got to work Friday morning he found an email from the parole board that stopped him cold.

The board, in its infinite wisdom, had apparently released Patrick Schooley Jr., one day earlier. He was a murderer Ferguson prosecuted in 1979.

Schooley, who was 15 at the time of the killing and 16 when he was convicted, abducted, robbed, raped and stabbed to death 78-year-old Bessie Rountree in her home on the evening of February 1, 1979.

The details of the crime could be the plot of a horror film.

Schooley had moved to rural Suffolk from Shreveport, Louisiana, to live with relatives.

On the night of February 1, 1979 Schooley walked to a nearby home where Ms. Rountree lived alone.

According to Schooley’s confession, which I’ve read, he asked to use Ms. Rountree’s telephone and she let him in her home.

Once inside he pulled a knife on the elderly woman and asked for money. She gave him cash from a chest.

For reasons that he didn’t explain, Schooley forced the woman into her car and drove her down the road. He then drove her back to her house where he asked for her purse, which was in her bedroom. He followed her.

He forced her to undress at knifepoint, raped her and then stabbed her five times.

By the time Rountree’s body was found Schooley was on a bus back to Louisiana, but one of his relatives gave prosecutors a bloody knife with “PS” engraved on the handle.

Schooley entered a guilty plea and was sentenced to three life sentences. One for capital murder (murder in the commission of rape), one for abduction and one for armed robbery.

“That judge did not want him getting out,” Ferguson told me Friday.

Friday’s email to Ferguson was dated April 29. It informed him that Schooley had been granted “discretionary parole” and his release date was April 30.

Not a thing Ferguson could do about it.

Ferguson added that it appears the parole board is looking for murderers who committed their crimes while they were juveniles and setting them free.

“Where does it stop?” he asked.

It should never have started. There are some crimes so grotesque, so heinous, that no matter the age of the perpetrator, that person has forfeited his right to ever walk freely in society.

Bessie Rountree lived 78 years. Her last hours were nothing but terror, humiliation, pain and finally death at the hands of a merciless predator.

This entry was posted in Crime , corrections and law enforcement and tagged COVID-19, Kerry Dougherty. Bookmark the permalink.