Virginia’s Lt. Gov. and Emmett Till 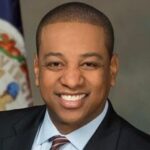 Justin Fairfax is a deeply unserious man with an inflated sense of his own importance.

On Tuesday night, as he shared a Virginia State University stage with four other Democrats who are competing for the nomination for governor, Fairfax demonstrated that he has no sense of proportion and little understanding of history, and will say almost anything to boost his chances of becoming Virginia’s next governor.

Fairfax is apparently still smarting over the fact that most of his fellow Democrats demanded his resignation after two women — one a Duke classmate of his, another a political science professor — accused him of sexual assault.

But on the debate stage he lashed out at all of his opponents, especially Terry McAuliffe.

“Everyone here on this stage called for my immediate resignation, including Terry McAuliffe three minutes after a press release came out,” Mr. Fairfax said.

“He treated me like George Floyd, he treated me like Emmett Till, no due process, immediately assumed my guilt. I have a son and I have a daughter, and I don’t want my daughter to be assaulted, I don’t want my son to be falsely accused. And this is the real world that we live in. And so we need to speak truth to power and we need to be very clear about how that impacts people’s lives.”

Fairfax wants a dose of truth to power? Here it comes: As awful as it is to be accused of sexual assault, nothing that happened to the lieutenant governor in the wake of those accusations even remotely approaches the horror that was visited on 14-year-old Emmett Till in 1955 when two white men kidnapped, beat, tortured and shot the teenager to death for allegedly flirting with a white woman.

They tossed Emmett Till’s battered remains in the Tallahatchee River. Till’s mother insisted on an open casket so the world could see what these racist monsters did to her boy.

The two men accused of this atrocity? They were acquitted by an all-male, all-white jury. Several years ago, the woman in the Till case retracted her accusations.

This is a case that still shocks the conscience today.

Comparing his ordeal to THAT? Craven. No sooner had Fairfax engaged in this preposterous hyperbole than social media exploded.

“Disgraceful,” Tweeted Adele McClure, executive director of the Virginia Legislative Black Caucus. “Justin has repeated his appalling comparison to Emmett Till since 2019. My heart goes out to survivors tonight as Justin Fairfax continues to repeat these traumatizing & harmful talking points that will replay again & again. This harm is not new & cannot continue.”

As far as George Floyd goes, we all watched him lose consciousness with a Minneapolis cop’s knee digging into his neck after he was accused of passing a counterfeit $20 bill.

The trial of that officer, Derek Chauvin, is underway.

Last time I checked, Fairfax was still alive. He never lost a paycheck or his public office after credible accusers materialized and accused him of rape and sexual assault. He’s now running for governor.

Several of his staff members resigned after the accusations surfaced. Yet most would agree that by most measures, life seems to be pretty good for Justin Fairfax.

As far as due process is concerned, the General Assembly should have launched an investigation into the charges against the lieutenant governor in 2019, but Fairfax opposed such action, according to The Washington Post.

Too much time has elapsed for criminal trials.

As a result, Fairfax’s reputation is sullied. He blames his political opponents for that.

Sad, but nothing compared to the murder of Emmett Till.

This entry was posted in Politics, Scandals and tagged Kerry Dougherty. Bookmark the permalink.