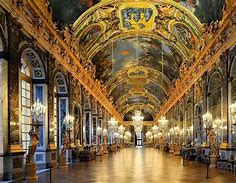 In Versailles’ Hall of Mirrors, everything is reflected hundreds of times.

The mirrors were also a commercial. They represented an effort of Louis XIV to establish for France monopolies on the production of luxury goods.

Everything in the process reflects back on itself. Those reflections both reinforce the structure and cement monopolies. Though it represents the intrigue of Versailles, COPN lacks beauty and grace. But, in another similarity, neither Louis nor Virginia’s General Assembly tried to represent the interests of the people in these enterprises.

This essay will help explain how COPN works. It would be shorter if the tentacles of COPN were not so completely enveloping and self-reinforcing. This is in its entirety both legal and a scandal, as with much else in Virginia politics.

Two recent COPN decisions affect my home area of South Hampton Roads. Those cases pointed to the systemic roadblocks to successfully challenging Sentara Healthcare’s dominance here which will never be surmounted while COPN stands as is.

The COPN applications we will discuss were requests for:

Both were opposed by Sentara, which was given standing even though it had not submitted completing applications. Both applications were rejected by the Health Commissioner.

Both relied on findings that were the result of a condition, Sentara’s regional monopoly, created by the COPN process itself.

So we’ll use them as a guide to the COPN octopus.

The summary data used to support COPN decisions are submitted by the providers themselves for that purpose. A compendium of those data is built for and used by COPN staff to support its assessments.

Patient-level data that is far less subject to manipulation is available from the state’s health data contractor, vhi.org (VHI). It could be used to support original assessments or in the case of COPN data disputes, including in the famous data controversy in Chesapeake. But patient-level data were not presented in evidence in that case.

VHI, the state’s data expert, was criticized in the proceedings by Sentara but was not even made aware of the dispute, much less called to testify.

Under Virginia law, COPN decisions are driven by algorithms such as:

The algorithms are populated by the data discussed above. The result is compared to a minimum threshold also specified in state regulations. If the result exceeds that threshold, the application has successfully passed that wicket.

The regulator is the Virginia Department of Health.The regulations have been “updated” with some regularity to favor incumbent monopolies.

In both South Hampton Roads cases we are using as our guide Sentara of course had large patient volume advantages over its competitors. With the closure of DePaul, it will be the most monopolized healthcare market in America with over a million population.

CRMC and Bon Secours applied to a COPN process in which the umpires were recorded in both cases to consider a correlation of patient volume to quality as a factor in assessing applications of competitors to expand or offer new services. That is a consideration not listed in criteria for determining need in the law. It therefore falls under “at the discretion of the Commissioner, any other factors as may be appropriate”.

Given that projections for only the first two years of a new service are considered, there is virtually no chance that a new service can hope to compete in volume with Sentara’s existing ones of the same type here.

The “that spot is taken” rule

In both rulings, the decision also was based on what I call the “that spot is taken” rule.

In the other decision, CRMC applied to expand its services. It was refused because its service area was dominated by Sentara in the new and expanded services — open heart surgery and cardiac catheterization respectively — it proposed to offer.

Of course the “that spot is taken rule,” like the “patient volume” rule,

It turns out that just because Sentara submits data to the state, it does not mean it can’t change it when it feels the need.

Going back to the Chesapeake Regional case, the existing data when plugged in to the existing algorithms exceeded the minimum threshold product. The VDH COPN staff then recommended in favor of CRMC.

An Informal Fact Finding Conference (IFFC) was held. Sentara was given permission by the Adjudication Officer to reassess and “correct” the data until the algorithms worked against CRMC’s application. He accepted the revised results and recommended the Commissioner reject Chesapeake’s application.

That kicked off the two court cases in on which I reported earlier.

The “concern for abandoned populations” corollary

In opposition to the Bon Secours application, Sentara decried the proposed reallocation of some of the resources and services from DePaul Hospital, closing in April, to another Bon Secours facility in the same region.

Sentara actually paid an attorney to submit that.

Sentara’s sudden concern for the population served by DePaul reminds me of the old story of the young man who killed his parents and asked for leniency because he was an orphan.

Competition to be considered

There is a provision in Virginia law (§ 32.1-102.3. Demonstration of public need required; criteria for determining need) that:

“In determining whether a public need for a project has been demonstrated, the Commissioner shall consider:

4. The extent to which the proposed project fosters institutional competition..”

The provision was added by the General Assembly after the most infamous COPN decision in history.

In 2008 a COPN decision granted an already dominant Sentara near total control of the South Hampton Roads hospital market while rejecting competing applications from Bon Secours. That decision isolated Bon Secours DePaul as a very small island in Sentara’s ocean and ultimately contributed to DePaul’s closure.

In the two cases revised here, the Commissioner “considered” competition. But it wasn’t the deciding factor in either case.

The Commissioner noted in the CRMC application that “[f]ostering competition has not historically been a primary objective in regulating highly specialized services such as open heart surgery . . . .” and further that open heart surgical patients were mostly Medicare patients so that competition did not really matter to price. Lots more “discretion.”

See you in court – the deference precedents

Once in the Virginia court system, a COPN decision by the Commissioner is by legal precedent given deference by the court as in Chesapeake. The court review is considered to be equivalent to a appellate court’s role in an appeal from a trial court.

By precedent, the court

“has no authority under the Virginia Administrative Process Act (VAPA) to reweigh the facts in the agency’s evidentiary record”.

And by precedent, the court may reject an agency’s factual findings

“only if, considering the record as a whole, a reasonable mind would necessarily come to a different conclusion.

These two precedents will be cited in every court case challenging a COPN ruling.

The court ruling recognized the validity of the introduction of “corrected data” in COPN decisions in Chesapeake. That is also now a precedent if it wasn’t already.

So where are we?

The COPN game is pretty much over before it starts.

That is before under the “concern for abandoned populations” corollary adjudicators and Commissioners have to endure a tearful epitaph by a monopoly like Sentara for a hospital it has helped drive into bankruptcy.

In Virginia today as in Louis XIV’s France, we see in COPN intrigue, corruption, lies, scandals, mirrors, power plays, monopolies, scoundrels, and other ugly courtiers …. and good luck in court.