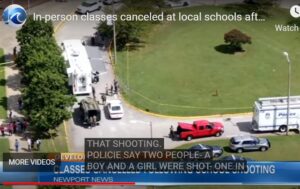 Straw in the wind #1: Two students were wounded in a shooting at Heritage High School in Newport News Monday. The incident didn’t fit the profile of a mass shooting by a mentally distressed student lashing out at random. The shootings, in which a male student was shot in the side of the face and a female was shot in the leg, stemmed from a dispute between two youths who knew one another.

Straw in the wind #2: Nearly 10% of Richmond Public School students are “no shows” for the 2021-22 school year, the city school system reports. Nearly 2,400 students have failed to show up to class this year. Of those 359 are “virtual learners” who have yet to check in online.

What we are seeing here is the fallout from last year’s disastrous policies of shutting down in-person learning. Most Virginia families were equipped to handle the shift, but many were not. Tens of thousands of children were left at home unsupervised as their parent (or parents) worked. Left to their own devices, many made a sham of studying and occupied themselves by interacting with each other on social media.

The decline in academic performance has been well documented, but school achievement may be the tip of the iceberg as far as damage done. The question we need to ask is how many of these children have effectively gone feral? To what extent have communities already wracked by single-family households, high unemployment, social pathology and low educational achievement endured even more social breakdown over the past year as children were removed from the main source of stability in their lives, their schools?

There’s a lot going on behind the scenes that Virginia news media has yet to pick up on. Here are some of the things I’m hearing.

Fights were breaking out more frequently between students just returned from school. Many students were acting on grudges simmering from arguments on social media. Whether we’ll get an honest accounting of low-level school violence, given the pressures on administrators to adopt therapeutic approaches to school discipline and report declining numbers of suspensions, is an open question.

Social promotion has long been widespread in Virginia schools, but never in history has the pressure been so intense on teachers to give students a pass. Tens of thousands of students actually lost ground academically over the year but were waived on to higher grades where they will be even less prepared to do the work than in previous years.

Accentuating these problems is the fact that schools are facing unprecedented shortages of teachers, staff and bus drivers. Teacher shortages in Virginia have been chronic for years, but they’re worse than ever now thanks to fear of COVID. According to the Virginia Department of Education, there are more than 1,000 openings for teachers across the Commonwealth, reports WFMZ-TV. As schools scramble to find more teachers, existing teachers are taking on extra classes, which increases the likelihood of burnout.

The combination of overloaded, burned-out teachers trying to instruct kids who failed to master their subject matter last year is not a good one. Schools might be able to pretend that kids are learning English and history, in which grading is highly subjective, but the results could be disastrous for math and science, disciplines with right or wrong answers that build upon the foundations laid in previous years.

Much of Virginia’s public education system is disintegrating, and the public would have no clue if it relied upon traditional news media. As always, those most affected will be the poor and minorities, especially inner city kids. But never fear, the ideologues running our schools these days will find a way to deflect from the catastrophe they created by blaming “whiteness,” “white fragility,” or “systemic racism.” And the predictable “remedy,” of course, will be more money.