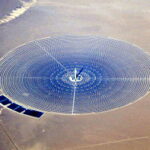 If you need another reason to break into peals of laughter over the recent CNBC “Top States for Business” ranking, consider this.

In the story about the infrastructure rankings, while praising the state of Nevada, the illustration provided was the aerial shot of the Tonopah Solar Energy facility. The failed, now-in-bankruptcy (also here) Tonopah Solar Facility. Shades of Virginia’s clean energy future to come? But I digress.

Disregard that category, and North Carolina is first, Texas second and Tennessee moves to third. Virginia falls to fourth. For another example, Utah was also boosted substantially by “Life, Health and Inclusion” (13%of its points) and falls out of the top five without them, replaced by Georgia moving up.

A fourth-place finish for Virginia would still have provided significant bragging rights for Democratic Governor Ralph Northam, but there would have been some nagging questions, since it would have been a decline from the last top ranking in 2019. Likewise, without that category, Minnesota and Colorado might have fallen out of the top ten, and Florida and Indiana might have climbed in.

The network’s justification for overweighting “Life, Health and Inclusion” is that corporate location managers look down on a state that requires photo identification for voting or lacks a host of anti-discrimination laws with punitive damages and private rights of action. That’s their story and they are sticking to it. The actual job growth and personal income stats tell a different tale.

And so does another 2021 ranking provided by another national Wall Street-connected online outlet, The Motley Fool. It was cited in the Republican statewide candidates’ response to the CNBC results, found on the Glenn Youngkin website (but not until the day after the CNBC story broke and flew around Virginia.)

Last updated in January 2021, The Blueprint, A Motley Fool Service, had Virginia number 49, one of the worst locations to be starting a new small business. Montana was praised as the best, and Virginia was at the bottom near Connecticut, the District of Columbia, Maryland, Rhode Island, and New Jersey.

Factors were weighted as follows:

It looks like Virginia came in dead last on “rate of new entrepreneurs.” It did badly compared to others on all of them. “Climate” is the general business climate. Does a bad score on this ranking cancel out the good one from CNBC? Not really, but careful voters should examine both closely.

This entry was posted in Business and Economy, Economic development and tagged Stephen D. Haner. Bookmark the permalink.