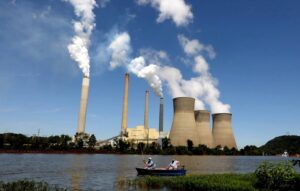 Kentucky may have already killed one West Virginia coal plant, and according to a recent article by West Virginia Public Broadcasting, Virginia’s State Corporation Commission may well shoot down two more.

Apparently, by 2028, many U.S. coal-fired power plants face costly EPA mandates to upgrade their wastewater treatment and coal ash disposal procedures. Without the upgrades, the plants must shut down.

Several of the WV coal plants in question are owned by subsidiaries of American Electric Power. AEP supplies some of the power, generated in West Virginia, to customers in Kentucky and Virginia. Thus, somewhat awkwardly politically, AEP needs approval from Virginia and Kentucky to spend hundreds of millions of rate-payers dollars on the needed coal plant upgrades. It is almost a no-brainer for Kentucky and Virginia to refuse funding projects that would support jobs in West Virginia, given the current pro-instate-electrification mania.

Indeed I was surprised how far away geographically the effected plants are from Virginia.

I have family residing in Hurricane, W,Va, so I know about the huge 3000-MW John Amos Power Plant visible from Interstate 64, almost all the way out to old Kentucky. But I never knew the billowing white clouds of steam represented some electrons owned by Virginia. Additionally the Mountaineer Power Plant on the Ohio River is another AEP plant with an “electrical connection” to Virginia.

Are they kidding me? Does AEP really expect Virginia Cavaliers in good faith to support a West Virginia Mountaineer power plant? We know we can spend that money in Virginia, and we will all become wealthy due to the near-zero cost of home grown, renewable energy. Wishful thinking abounds these days, of course.

In all honesty, I have for decades been a vocal critic of coal power in the dirty manner as typically implemented in the USA. I would like to see West Virginia migrate to cleaner natural gas and/or possibly clean coal technologies. But I am out-voted, given the obvious culture war against all U.S. use of fossil fuels.

West Virginia’s predicament funding these power plants may illustrate a generic weakness of the quasi-state-owned utility monopoly system. Elected officials view utilities as state-run profit centers that they can control to create jobs within the state. Creating jobs in West Virginia is just not a priority in Virginia.

West Virginia wants to keep these coal-fired power plants running. We’ll have to stay tuned to see if the Mountaineers can find a way to finance the upgrades, presumably without help from us Cavs (or in my case, the Nittany Lions).

This entry was posted in Energy, Regulation and tagged Bill Tracy. Bookmark the permalink.