Teachers and other self-proclaimed school advocates in Richmond plan to assemble on a footbridge over the Bellevue Overpass this evening and hold up giant electrified letters spelling out “Fund Our Schools.” It’s a clever media ploy that will guarantee great visuals for photographers and television crews, and undoubtedly it will gin up lots of uncritical coverage about the need for school funding.

It falls to Bacon’s Rebellion to provide the fiscal context. Here is some data just published on the state’s “Virginia Compared” website comparing spending, revenue and outcomes data for Virginia in comparison to the other states. 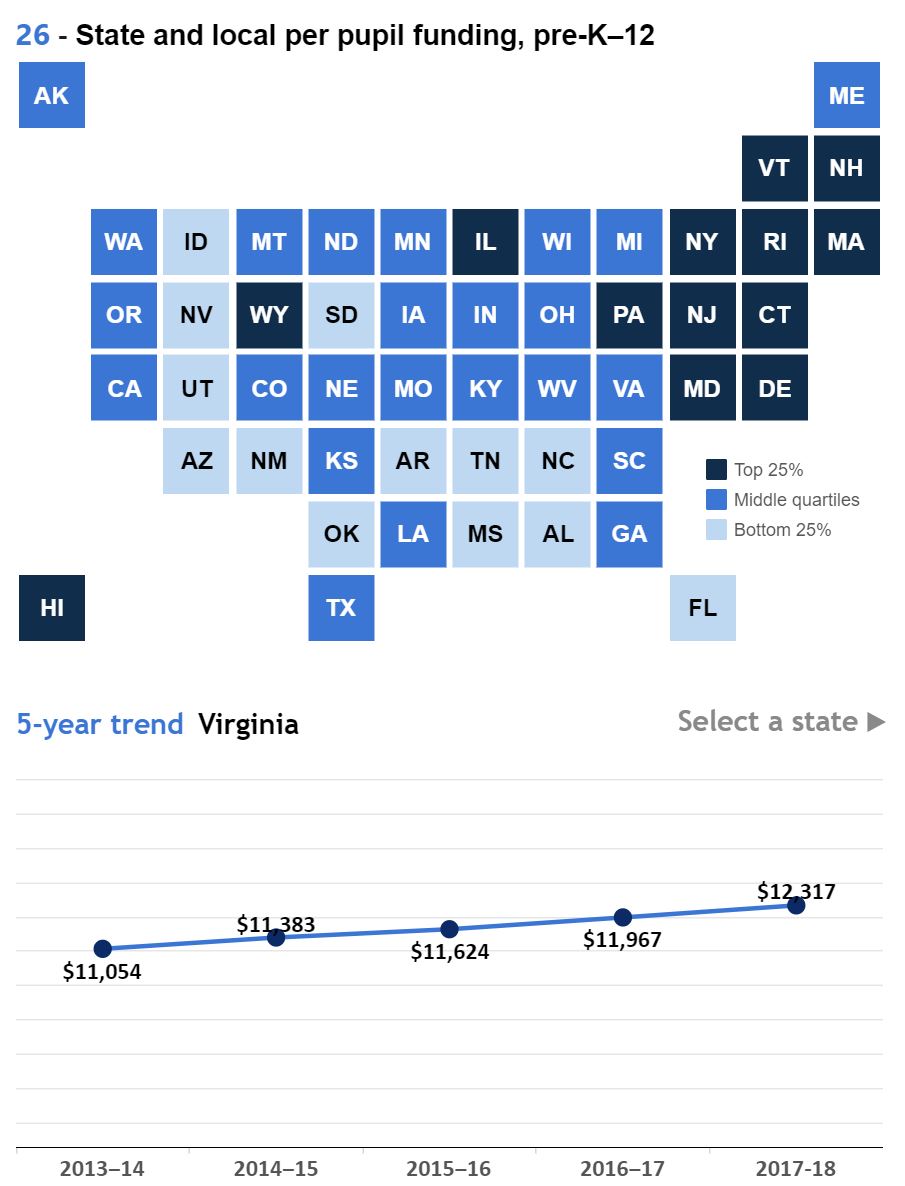 Virginia ranked 27th in the country in spending per pupil. The sum, $12,317 in the 2017-18 fiscal year, has increased considerably since then. For the five years covered in the data display, per pupil spending increased 11.4%. That significantly exceeded the 7.9% inflation rate over the same period.

Here’s what they have yet to prove: that there is any meaningful correlation between per pupil school spending and educational outcomes. John Butcher, of Cranky’s Blog fame, has demonstrated about as conclusively as anything can be demonstrated, that variations in per-pupil spending between Virginia school districts have about zero correlation with outcomes.

Similarly, there was no correlation between the increase in spending of the mid-2010s and SOL scores. Obviously, spending cannot drop to zero. We cannot have classrooms with teachers teaching 50 students. We cannot ask teachers to work for free. We cannot have schools with asbestos spilling out of the ceilings. But relatively small variations in spending within the current average of $12,000 to $13,000 per pupil have virtually no affect.

If Virginians want to improve the quality of K-12 education, we need to do a better job with what we have. Some schools and school districts are punching way above their weight, spending-wise. Others are miserable failures. Before asking taxpayers to ante up more money to perpetuate the status quo, let’s make sure the status quo is doing its job.

This entry was posted in Budgets, Education (K-12) and tagged James A. Bacon. Bookmark the permalink.