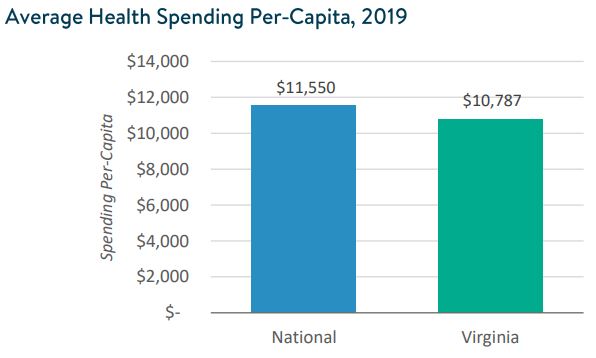 Annual health care spending per person in Virginia is slightly below the national average — about $10,800 per person compared to $11,600 for the nation as a whole, but most of that advantage is eaten up by higher insurance costs, finds a new study by the Altarum Institute that was underwritten by the Virginia Hospital & Healthcare Association (VHHA).

Among the major components of healthcare expenditures, spending on hospital services is 12% less per capita in Virginia than the national average, 18% less for nursing homes, and 3% less for physicians and clinical services. But Virginians spend 7% more per capita on prescription drugs, says the study, based on 2019 numbers. Overall, per capita health spending on providers is 7% lower in Virginia than it is nationally.

While per-person spending on health providers is $800 less per person,  individuals pay only $200 less than the $7,000 national average on private-sector employer insurance premiums. “Insurance costs are actually higher in Virginia, with an average individual annual premium of $6,400 versus $5,800 across the US,” the study says. “Data on the 2020 benchmark premiums in Virginia show insurance costs have decreased slightly, but remain well above the national average, despite lower average spending per capita on healthcare.”

Coinciding with the publication of the Altarum study, the VHHA released the results of a Mason-Dixon Polling & Strategy poll showing that Virginians want more transparency for insurers and support changes to state law that would “limit insurers’ ability to unilaterally change contacts with health care providers.”

From a political perspective, the VHHA initiative represents a remarkable break from past practice. While players in the healthcare sector might fight like cats and dogs when lobbying over particular bills in the legislature, they tend to play nice in public. I don’t recall ever seeing a Battle of Trafalgar-sized broadside like this by one Virginia healthcare interest group against a different interest group before.

Why would the hospital lobby suddenly attack Virginia’s insurance industry? The issue at stake appears to be HB 2021, which, in the VHHA’s description, would halt unilateral contract revisions by insurers and provide people with greater predictability of coverage.

“These poll numbers clearly show that Virginians expect a greater degree of accountability from health insurance companies as well as more support for families and business from state regulators at the Bureau of Insurance who are charged with monitoring the conduct of insurers operating in the Commonwealth,” said VHHA President Sean T. Connaughton in the press release. “That includes strengthened consumer protections, enhanced public transparency, and legal limits on the ability of insurance companies to unilaterally change existing contracts with health care providers.”

Jim Sherlock and I have been hammering  Virginia hospitals for their regional healthcare monopolies, their stifling of competition, and the excessive profits of nonprofit health systems. But hospitals are not the only cause of escalating health costs. The VHHA makes the case that the healthcare insurance carriers need a closer look. Fair point. Nothing would surprise me less to than find that insurers in Virginia were making excess profits, too. The insurance industry warrants the same close scrutiny we give the hospital industry.

But it’s not clear from the Altarum data that private-sector insurers are the problem. 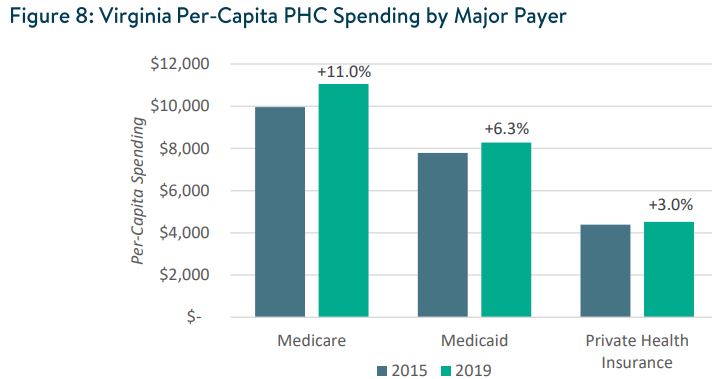 Healthcare insurers can be classified as private-sector (accounting for $25.7 billion in revenue), Medicare ($16.9 billion), and Medicaid ($9.7 billion). Over the years covered by the study, 2015 to 2019, Medicare saw by far the greatest increase in spending per person, 11%, followed by Medicaid at 6.3%. Private insurers increased per-person spending only 3.0%. Virginia’s Bureau of Insurance exercises no meaningful oversight over Medicare and Medicaid. I don’t see how the bureau could restrain either Medicare or Medicaid spending increases.

The Altarum finding that the cost of hospital services in Virginia is 12% lower than the national average is also of interest. The figure seemingly contradicts the Sherlock/Bacon narrative that charges by hospital cartels and monopolies in Virginia are a root cause of the ever-escalating cost of healthcare in the state. The true significance of that number, I would suggest, is not that Virginia’s hospitals are doing a good job in holding down costs, but that the political economy of healthcare is replicated in state after state, and that most states have a problem with health-system cartels and monopoly pricing. Still, I suppose it is some consolation that the rents (excess profits) that hospitals extract from the populace in Virginia are less onerous than in other states.