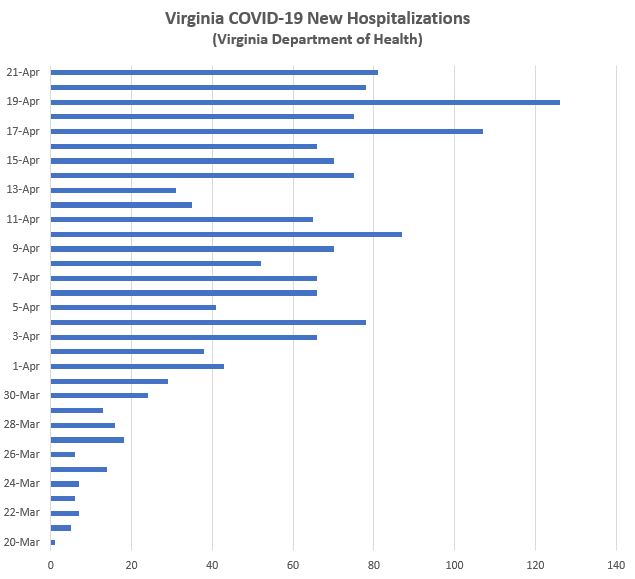 The number of COVID-related hospitalizations in Virginia is stabilizing. The curve is flattening, hospitals are in no danger of being overwhelmed, and Virginians want to get back to work. But Governor Ralph Northam says he will not relax his emergency social-distancing edicts until he gets better data. And there’s the rub. Virginia lacks the testing capacity to generate the data that would make the Governor comfortable enough to roll back the shutdown.

Northam said that boosting testing in the state is part of “any plan to ease restrictions on businesses and address the pandemic,” but as of Monday, state officials did not yet have a grasp on the state’s testing capacity and had not set an overall testing goal.

“Testing is the key to those next steps,” Northam said.

To address the problem, the Governor has created a “work group” to focus on expanding testing in the state, including the number of sites doing tests, the population eligible for testing, and hurdles to more testing.

UVA Health System, VCU Health, Sentara Health and, most recently, the Carilion Clinic have all developed their own testing capabilities in recent weeks, while private labs have ramped up their testing as well. Yet tests reported to the Virginia Department of Health have not increased meaningfully over the past three weeks, even as the epidemic gained momentum in Virginia. The number of new tests reported daily can be seen here: 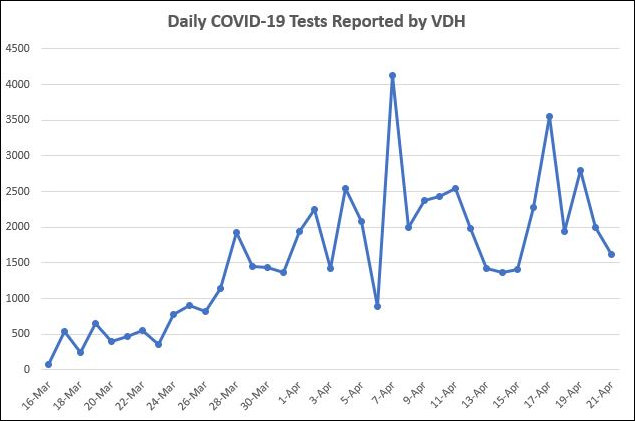 Virginia’s public health officials cannot offer an explanation why. Or, as the RTD put it, “State officials couldn’t pinpoint a specific reason for the lag of testing in the state.”

The state health secretary, Dr. Dan Carey, said that with increased testing capacity, there was a need for more coordination between testing supply chains, labs, entities that can collect samples and everyday people seeking tests. “We need that added coordination,” Carey said.

Think about it. Even as Maryland Governor Larry Hogan manages to snag 500,000 testing kits from South Korea, Virginia’s testing regimen is floundering. Worse, the people in charge in Virginia don’t even have any explanation for why. In desperation, the Governor is forming a task force to find answers.

Bacon’s bottom line: COVID-19 testing, which generates the data needed to make informed decisions on how to address the epidemic is in total disarray. And Virginia’s economy is being held hostage. The mishandling of COVID-19 may go down as the worst case of bureaucratic incompetence in Virginia history.