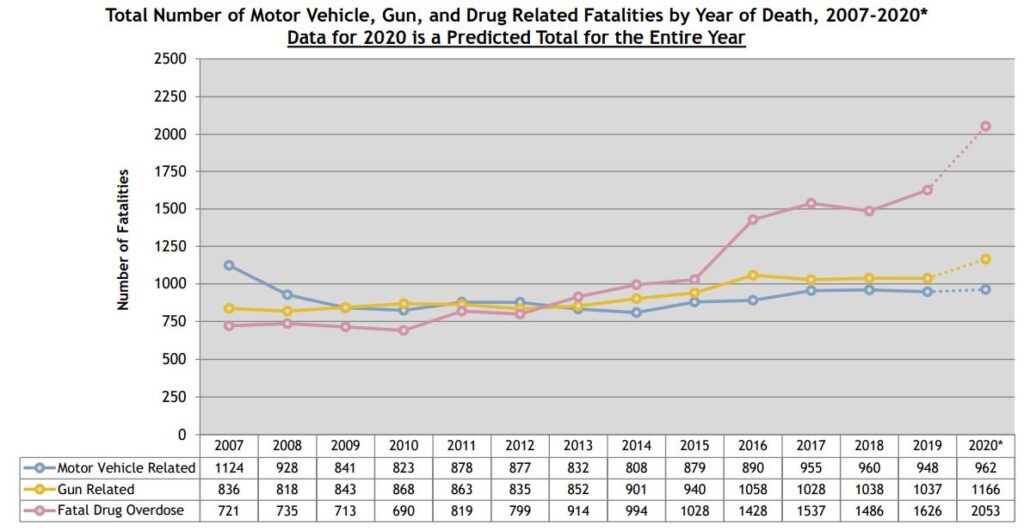 In just the first half of 2020, at least 1,086 Virginians died from drug overdoses, an increase of 427 deaths, or 39%, from the first six months of the previous year, according to the Virginia Office of the Chief Medical Examiner’s 2nd Quarter 2020 report.

The first quarter was trending upward before the COVID-19 epidemic hit, showing an increase in 52 deaths compared to the same quarter the previous year. However, overdose deaths spiked in the second quarter, surging by 254 deaths in a year-to-year comparison, after Virginia mandated lockdown measures that threw hundreds of thousands out of work and enforced social isolation.

Kathrin “Rosie” Hobron, the Virginia Department of Health’s statewide forensic epidemiologist, described the spike to The Virginia Mercury as “absolutely shocking.” She predicts a total of more than 2,000 overdose deaths this year.

“Social isolation can obviously increase feelings of depression and other mental health symptoms,” said Taylor Ochalek, a research scientist at the Virginia Commonwealth University School of Medicine. “So people are feeling really alone during this time. That might put them at a higher risk of relapsing. They don’t have their normal social support.”

It is difficult to say how many of these overdose deaths should be attributed to the lockdown. The number of overdoses was trending higher before the COVID-19 epidemic struck, so it is not unreasonable to expect that some of the increase seen in the 2nd quarter would have occurred even without the epidemic. But if we use the first quarter as a baseline — roughly 50 additional deaths — we can guesstimate that about 200 of the increase in the second quarter was related to the lockdown. Further, one can predict that the longer the social isolation lasts, the worse the problems of social isolation will get. An order-of-magnitude guess would suggest that 600 additional overdoses could result from the epidemic this year. That compares to about 3,900 virus-related deaths so far (a number that will grow higher by the end of the year).

Measures enacted to slow the spread of the virus and reduce deaths must be balanced against the public health costs stemming from job losses and social isolation. These numbers show that the price is steep for Virginians struggling with substance abuse issues. Important to note: The Medical Examiner’s report tracks only drug overdoses. Alcohol abuse is far more prevalent than opioid abuse. The report doesn’t tell us how many people are literally drinking themselves to death.

The epidemic would have extensive negative consequences even in the absence of the emergency lockdown measures enacted by Governor Ralph Northam here in Virginia. As the experience of Sweden showed, citizens engage in voluntary self-isolation even in the absence of government diktats. Though arguably necessary, lockdown measures that enforce stricter measures than people would adopt voluntarily do accentuate the negative repercussions.

Tens of thousands of Virginians are enrolled in substance-abuse programs. The prevailing treatment mode for addicts in community settings is to participate in in-person sessions for moral support. When caps on the number of people who can gather in one location are restricted, as has occurred with innumerable 12-step programs around the state, there are no good substitutes. Zoom meetings are a substitute, but a poor one. Thus, not only are many Virginians made more psychologically vulnerable to substance abuse through the loss of their jobs, falling behind in rent payments, and distancing from their friends and families, they often lose their primary means of social support in fighting their addictions.

If Northam ponders tightening the restrictions on in-person gatherings, now 25 people maximum, I would urge him to give special consideration to the drug and alcohol addicts whose lives, quite literally in many cases, depend upon their ability to hold in-personal meetings.

This entry was posted in Public safety & health, Uncategorized and tagged James A. Bacon. Bookmark the permalink.