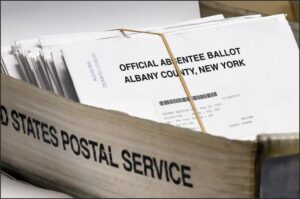 For election accountability purposes, chain of custody for ballots should be observable and publicly verifiable. So, why are two of the largest counties in Virginia, as well as other localities, planning to expand the chain of custody to include a third-party absentee-ballot processing company from Washington state that was caught red-handed ignoring the security measures built into the law?

Before 2021, absentee ballots were mailed from local registrars’ offices and processed and supervised by the registrar’s staff. In 2021, a bill (SB 1239) was passed that permits localities to hire a third-party company to print, assemble, and mail absentee ballots. Once hired, this vendor receives the name, address, precinct, district and voter ID information for individual voters. In Loudoun County, for example, the list of permanent absentee ballots that would be handed over to the private vendor would number around 15,000.

Last year, Fairfax County, the most populous county in Virginia, outsourced the printing and mailing of absentee ballots to a company called K&H located in Washington state. K&H failed to follow Virginia law. The company did not sign a legally required oath before beginning work. A public information request found that the vendor failed to comply with Virginia law and did not sign the oaths until months after the election was over.

State law says, “The printer contracting with or employed by the electoral board or general registrar to print the ballots shall sign a statement before the work is commenced…”

Entrusting bulk absentee ballots, the most fraud-prone part of  our elections, to strangers on the other side of the country is a bad idea. Some ballots are going to people who may not have recently asked for them, the chain of custody barely exists, and private voter information is being handled by a third-party company. If all that starts to look like a nightmare in the making, in real life it gets much worse.

Loudoun County recently announced it may follow Fairfax County and make a similar contract with the same vendor for the upcoming 2022 general election. Judy Brown, the Loudoun County registrar, was advised against outsourcing by local citizens and election security advocates including a Loudoun County election integrity working group, former State Board of Elections member Dr. Clara Belle Wheeler, Delegate Dave LaRock, R-Loudoun, and the nonpartisan Virginia Fair Elections coalition, as well as many others.

Brown reportedly had decided against the initial plan to outsource their county’s absentee ballot printing and mailing process only to flip-flop without explanation.

The number of absentee votes cast has skyrocketed over the last couple of years. In Virginia, several laws were hastily enacted to expand the duration of elections and the processes used to distribute and process ballots. The often-exaggerated precautions associated with COVID-19 were used to justify large-scale expansion of absentee voting. A state law passed in 2020 (HB 207) opened absentee voting to any qualified voter, regardless of circumstance. The same law allowed for voters to be added to a “permanent absentee” list so a person could opt-in to receive a mailed absentee ballot for all future elections.

Virginia localities have demonstrated that they are capable of handling large batches of absentee ballots. Loudoun handled about 80,000 absentee ballots in 2020. That number dropped significantly in 2021 to about 23,000 ballots. The process requires diligent care and attention to detail. Some registrars may consider steps such as hiring more staff, or implementing a stricter employment application process.

For some, the motivation to outsource the process is a new requirement (SB 3) that absentee ballots now be sorted and reported by precinct. That means localities might be handling many different ballots in the same election. Yes, that is a challenge, but if a private company can handle it, a registrar should be able to as well. One option for sorting ballots has been successfully used for more than 10 years in Chesapeake; the city orders ballots that already have special barcodes that allow sorting by precinct.

There is clear consensus among many who are scrutinizing this process that this outsourcing to third parties is a bad practice. They see outsourcing as problematic and flawed and hope that all 133 jurisdictions in Virginia will maintain the integrity of elections in printing and mailing all ballots, especially absentee ballots. One of the best practices would be to keep absentee ballot printing and mailing processes in-state and in-house.

Outsourcing the absentee ballot process will give good reason for Virginia’s voters to question election integrity at a time when voter faith in elections is already greatly diminished.

This entry was posted in Electoral process, Uncategorized and tagged Lindsey Zea. Bookmark the permalink.