VCU to Crack Down on Fraternity Hazing, Drinking

A year after the death of a student in a fraternity hazing incident, the Virginia Commonwealth University administration is poised to enact sweeping reforms of the fraternity/sorority culture. Key changes in effect or under consideration include cracking down on hazing, prohibiting alcohol at fraternity events, and implementing a Diversity, Equity & Inclusion plan.

Nineteen-year-old Adam Oakes died after drinking heavily during a hazing incident at the Delta Chi fraternity, falling, and hitting his head on a tree. VCU suspended the fraternity and hired an outside consulting firm to study the university’s Greek culture and submit recommendations. That Dyad Strategies report, along with an internal VCU report, were released last week.

Greek life at VCU plays a smaller role than at some other Virginia public universities. Only 5.4% of undergraduate students are members of a fraternity or sorority, compared to 35% at the University of Virginia 24% at the College of William & Mary, and 19% at Virginia Tech, according to a VCU “Greek Life Review” released last week.

And by many measures, members of VCU fraternities have more positive attitudes than their peers on other campuses. According to a Dyad Strategies survey, they have lower tolerance for hazing, engage in less binge drinking, and have a healthier sexual-assault “mindset” regarding victim blaming. (An issue that surfaced in the survey but neither of the narratives is that VCU sororities were significantly more likely than their peer sister organizations — and even VCU’s fraternities — to engage in binge drinking.)

Fraternities and alcohol. VCU issued guidance a week ago prohibiting alcohol at all activities, events or gatherings of recognized student organizations. The concern, as identified by the administration, is that roughly 75% of all fraternity and sorority members at VCU are under the legal drinking age of 21 at the beginning of the school year.

“Alcohol is allowed at events for the pleasure or convenience of, in most cases, a minority of the expected attendees; meanwhile, underage attendees may be tempted, allowed, or sometimes encouraged by others in attendance to violate the law and put themselves in danger,” states the VCU report. Indeed, alcohol is often used as a recruiting tool for Greek organizations.

Making the job of regulating Greek life more difficult is the often informal nature of frats and sororities found in off-campus housing. Unofficial, unrecognized fraternity houses dot the landscape around VCU. Often, houses are rented by upperclassmen and “passed down’ within chapters from year to year. Some give themselves Greek letters, some do not. Some are affiliated with national organizations; some are not. The administration has trouble getting students to update their addresses from year to year and, and finding out who lives in these houses at any given time “has proven to be a challenge,” states Dyad Strategies.

VCU’s philosophy is that if the administration is made aware of these off-campus facilities, it does its best to address them, Dyad says. The trouble is, “VCU is rarely made aware of these issues, and when they are, the convoluted organization misconduct process makes it difficult to hold groups accountable.”

The VCU report acknowledges the need to address the social culture of off-campus housing, but beyond improving police patrolling of the surrounding neighborhoods, seems at a loss of what to do. “Further evaluation is needed.”

The obvious problem that neither report acknowledges: The more VCU seeks to regulate recognized frats and sororities, the more students will create informal, unregulated arrangements. Young peoples’ need to belong to a group is a powerful one.

Fraternities and race. Student surveys indicate that VCU fraternity and sorority organizations are more open to diversity and inclusion on average than their peers on other campuses, but attitudes need adjusting, both Dyad and VCU conclude. Writes Dyad:

Students within the community reported that [Interfraternity Conference and College Panhellenic Council] chapters tend to tokenize members of marginalized identities. One student shares that [recognized Greek organizations] “believe that having five members of color out of 60 makes them diverse” and that members of color are tokenized when it benefits the chapter. … One student leader reported that “racism in the community is swept under the rug … nobody wants to talk about it.”

The perception from outside the fraternity and sorority community is that if a student is not white or conventionally attractive, they are not welcome to join and IFC or CPC organization. … Students also shared concerns that members of the IFC and CPC community have made openly racist remarks on social media and have not been held accountable by their organizations or the University.

These observations are vague, subjective, and one-sided, but some in the VCU  administration believe that something needs to be done. Just exactly what is not clear yet. Does DE&I mean that frats and sororities should be more integrated, or does it mean that “people of color” should be allowed to self-segregate into their own ethnic enclaves?

The VCU report recommends developing a Comprehensive Diversity, Equity and Inclusion Plan for the Office of Fraternity and Sorority Life. The administration will consider the proposal this fall. 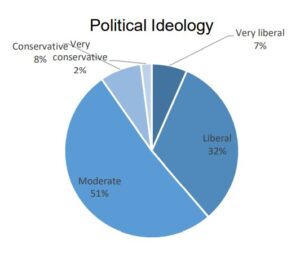 Student political leanings. For what it’s worth, VCU students — even those belonging to frats and sororities — are not politically “conservative.” Only 10% of men and 6% of women describe their political ideology as conservative or very conservative. 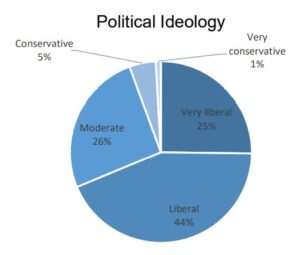