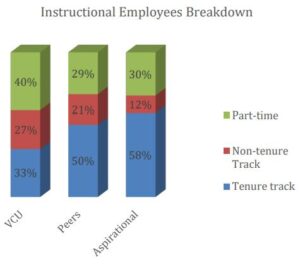 Virginia Commonwealth University is deploying the revenue from tuition increases to expand administrative staff rather than hire more tenure-track faculty and improve the educational experience of its students, charges the VCU Chapter of the American Association of University Professors (AAUP) in a just-released paper, “A Report on the Administrative Structure at Virginia Commonwealth University.”

Between fiscal 2019 and 2020, VCU increased salary outlays for management employees by $10.5 million, or 13.6%, according to data contained in the report. Over the same period, tuition revenue increased $13.1 million, or 3.8%. In other words, higher payroll for management amounted to 80% of the new revenue raised from the tuition increase that year.

“As an institution, VCU is responding to the crisis in higher education in the least effective way possible — hiring more and more administrators and non-instructional employees — rather than investing in the core, intertwined missions of education and research,” concludes the paper, which will be presented as written comments to the VCU Board of Visitors next month.

While expanding its administrative staff over the years, VCU has contained costs by hiring more short-term, non-tenured instructors than peer institutions do. At VCU 15% of all employees are categorized as management, the report says. “This is twice the percentage of our peer institutions.” Likewise, “there are substantially fewer tenured and tenure-track faculty at VCU than at our peer institutions.”

The ratio of tenured and tenure-track faculty to total instructional employees “directly impacts program quality,” the report contends. Non-tenure-track instructors, many of whom are part-time, are paid less, have shakier job security, and devote less of their time to developing professional networks and community ties that help students secure professional opportunities. Such relationships are especially important for VCU’s students, a high percentage of whose parents do not have college educations and lack professional relationships.

“The choices made to expand executive, administrative, and managerial staff, and their compensation,” states the study, “have been paid for by our students, particularly our most financially challenged students who are disproportionately likely to be first-generation college students and students of color. This development puts our mission at risk.”

The report contains the following factoids:

“Students … are going to look elsewhere if VCU does not correct its course,” the report says. “Finance-savvy students are not going to pay more and more for a VCU education — which is already among the costliest in the Commonwealth — when that additional revenue is being spent on management and administration rather than being invested directly into their education.”

What is to be done? The AAUP chapter requests that the Board of Visitors launch a comprehensive review of the university’s administrative structure and instructional staff, bringing in a faculty-vetted consulting group to assist.

Bacon’s bottom line: It is important to note that the authors behind this report are not disinterested parties. They speak for tenured faculty, who also share a privileged position within the hierarchical structure of the modern university. However, I do not dispute their core arguments (a) that VCU is top-heavy with administrators, and (b) it should be investing in building the quality of its faculty.

VCU offers a poor value proposition to students: higher-than-average tuition among public Virginia four-year institutions and a lower ratio of tenured and tenure-track faculty. That puts the university’s business model at risk.

The Board of Visitors appears to be oblivious to this reality. Aside from adding to administrative bloat, the Board is focused mainly on buildings. See Dick Hall-Sizemore’s previous post highlighting the VCU proposal to build a $181 million Arts and Innovation Building and a $152 million Interdisciplinary Classroom and Laboratory Building. What would be the payoff from such massive investments? As Hall-Sizemore notes, the VCU administration seems hard-pressed to explain it.