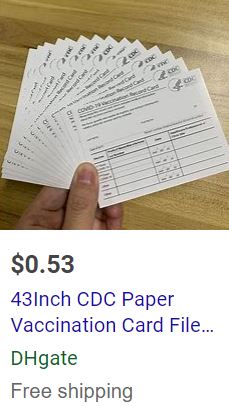 The Delta variant is so easily transmitted that Virginia public health officials say it is just a matter of time before all Virginians are exposed to it. In response, employers are requiring employees to be vaccinated and businesses are turning away unvaccinated customers. Suddenly, there is a need for Virginians to to prove they have gotten their shots.

Give credit to the Virginia Department of Health for anticipating that need. VDH is developing a tool that will allow businesses to quickly and easily verify customers’ vaccination status by scanning a QR code, reports WAVY TV. That tool will be an alternative to the existing VDH portal that allows Virginians to print out a PDF confirmation.

State vaccination coordinator Danny Avula told WAVY that the state has no immediate plans to implement vaccine passports. The initiative is a response to private sector demands for proof of vaccination. When the FDA gives full regulatory approval to the Pfizer vaccine in September, however, he expects vaccination requirements will become more common.

I just hope VDH’s rollout of the proof-of-vaccination initiative is more effective than its bumbling program for administering the vaccines in the first place.

You can search for your vaccination record here. Just enter your name, zip code and date of birth.

If I’m going to need a proof of vaccination, I figured, I needed to get a head start because I’m pretty sure I’m going to encounter problems. So, I tried signing up for one. And therein lies a story.

You see, I had registered with VDH originally to schedule a shot soon after its vaccination portal opened. Vaccines were in short supply and no one knew where to get one. I never heard from VDH, so I signed up for an alternative registration portal maintained by the federal government. In the meantime, a friend tipped me off that a senior-living facility had some surplus Pfizer vaccines and I could get a shot if I hurried over that afternoon. Which I did. The senior-care personnel told me that the facility would transmit a record of the vaccination to the appropriate authorities. But the facility was switching over to the Moderna vaccine the next couple of days, and things were in a state of flux. I’m not sure if that the record ever got transmitted.

Why do I think that? Because a few weeks later, I was contacted through the federal vaccination portal and scheduled to get a shot at the Richmond International Raceway, where a mass shot-dispensing operation was underway. I showed up on time but got hung up in red tape because local authorities did not have a record of my original shot. That didn’t stop me from getting a second poke, but it tipped me off that something was amiss in the vaccination databases.

Further confusion occurred when the the VDH finally got around to contacting me a month or two later to schedule a shot. I informed the scheduler that I’d gotten both shots. She seemed satisfied with my explanation, and that was that… until a month or so later when VDH contacted me again. Nothing had changed, I said. I’d still had two shots. At that point, I concluded the VDH system was a mess, but I’d gotten my vaccinations so what did I care?

Now I care. If I want a confirmation of vaccination, I may have to get it through VDH. And if the VDH doesn’t have both of my shots in its database, I could be out of luck.

This morning, I entered my name into the state’s Vaccination Record Request Portal. Here is the response I got:

There is no phone number associated with your vaccination record. Please submit your request online and allow 2 to 3 business days for staff to respond.

What? No phone number? How could there be no phone number when VDH called me twice! Not a good sign. Nevertheless, as a dutiful and compliant citizen, I did as directed and submitted my request online. We’ll see whether or not I hear back in two or three days.

I doubt I’m the only person encountering difficulties with the VDH database. Let’s face it, while Virginia’s vaccination effort has improved considerably, the early rollout was a fiasco. There were competing scheduling portals, one state, one federal. People got vaccines wherever they could find them — hospitals, doctors’ offices, CVS drug stores, clinics, nursing homes, mass vaccination centers — often at the last minute through word-of-mouth sources like I did. Rather than let surplus vaccines go bad, nurses were giving shots to people walking in off the street. It was chaos.

I never bothered to rectify my VDH vaccination records because, frankly, I knew it would be a pain in the butt. As long as I had my two shots, why did it matter?

Now, it appears, it might matter. I’ve got a CDC vaccination card with some notes scribbled on it. Now that that we’re hearing of people making fake cards, will my card constitute valid proof of vaccination? If not, what if the VDH database refuses to confirm my double-vax status? Will I get a QR code? Who knows?