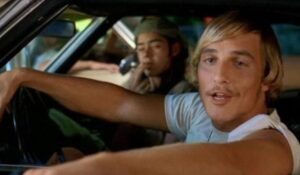 No, no, those are the stars of the movie “Dazed and Confused.” They just look like they work for the health department.

It’s been 19 days since Governor Ralph Northam appointed Danny Avula, health department director for Richmond City and Henrico County, as Virginia’s vaccine “field general.” Given what appears to have been a total lack of planning for the vaccine rollout before his accession to the hot seat, it’s hardly reasonable to expect him to have wrung order out of chaos in such a short time. Nevertheless, confusion is the only way to describe the situation at present.

While the Virginia Department of Health has established a reasonable set of guidelines for which ages and occupations should be prioritized to receive the vaccine, there is far less clarity about who is to give the shots, where to go to get them, or where to sign up to get them.

There are many channels through which the 50 states have delivered the vaccine — doctors’ offices, hospitals, clinics, pharmacies, and drive-through centers. In the absence of Northam administration leadership, a system in Virginia coalesced around hospitals as the entities best organized to carry out the effort. According to today’s update of the VDH COVID-19 dashboard, a total of 475,000 shots have been given statewide. As of Jan. 19, hospitals had administered 234,400 of the vaccines. Were that figure brought up to date, it would be significantly higher.

Just as Virginians figured out that they could access the vaccine through hospitals and began scheduling appointments, the Northam administration abruptly changed how it allocates the doses it receives from the federal government. Now vaccines will be distributed to health districts based on population.

The Virginia Hospital Center in Arlington, which had been scheduling patients to receive the vaccine, now says it will run out of doses in the coming week. As the The Washington Post observes, the switch is “upending a distribution system that had been in place for several weeks.”

Based on data compiled by Beckers Hospital Review (which must be viewed with caution due to coding problems and lags in data collection), Virginia ranked second lowest among the 50 states on Jan. 22 for the percentage of vaccines that had been administered: only 362,092 out of 992,375 doses, or not quite 37%.

Hospitals and health departments don’t know how many doses they’ll receive from week to week, making it impossible to open new clinics. Some hospital chief executives and elected officials say they worry there won’t be enough shots to administer second doses in the two-shot regimen. …

Avula, Virginia’s newly appointed vaccine coordinator, said the state has changed the way it allocates doses — directing them away from hospitals and toward local health districts, which are developing a greater capacity to store and administer the doses.

“Now that capacity has ramped up across the state, we really need to prioritize the equitable distribution of vaccine,” Avula said. “Our lack of supply and the increase of capacity of the rest of the state means there just is not enough vaccine to go around.”

As in Northern Virginia, supply-chain disruptions are being reported in the Fredericksburg area. Left to its own devices, the Rappahannock Area Health district, which encompasses about 375,000 people, developed its own distribution plans. Mary Washington Healthcare moved as many as 1,500 people a day through its clinic, and additional clinics were established in King George County and the Brisben Center homeless shelter. Reports the Free-Lance Star:

“Just when we were ready to launch an accelerated vaccination campaign, our supply is reduced,” said Joe Saitta, incident commander with the local health district. “It’s disappointing, but we will move public vaccinations forward with the supply we’re given.”

Virginia officials learned Thursday that the state’s allotment of the federally supplied vaccines will be about 105,000 doses a week for the next month—about a third of what was requested.

Meanwhile, the politics of race is hovering in the background. While Avula has pledged an “equitable” distribution of the vaccine, The Martinsville Bulletin is reporting that the race/ethnicity had not been recorded for more than half the vaccinated individuals reported into the data system. “Black and Latino workers make up nearly a third of the state’s healthcare workforce, but available statewide vaccine reporting shows les than 10% of those receiving shots are Black and barely 7% are Latino — a group for which as of Saturday, the state had no outreach plan available.”

VDH spokesperson Erin Beard said VDH will not require vaccinators to report race/ethnicity. “VDH’s goal is to vaccinate as many people as possible, and we do not want to turn away any person because they did not provide supplementary data.”

Virginia is the second-worst state in the country at tracking vaccinations by race and data, the Bulletin reports. The usual suspects are portraying the discrepancies as indicative of systemic racism.

As for Avula’s claim in the Post that there “there just is not enough vaccine to go around,” there are roughly 630,000 undelivered vaccines in Virginia, according to the Beckers Health Review data. In a press conference Friday, even Avula said the number was about 600,000.

To close the gap, Avula said the state “will continue building infrastructure around mass vaccination events.” It is also looking to collaborate with pharmacy chains outside of CVS and Walgreens.

Of course, that’s all in the future. In the meantime, it appears, the existing vaccine-delivery “infrastructure” will be under-utilized.