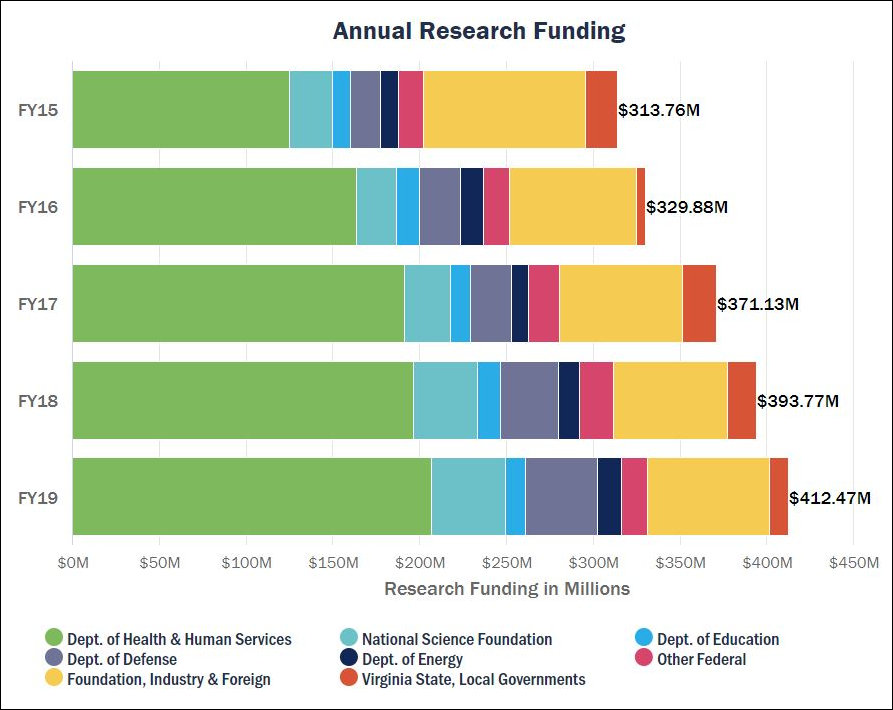 One can debate how well the University of Virginia is serving the interests of students, families and the general citizenry through its aggressive increases in tuition, fees, and other costs of attendance. But there is no denying that Virginia’s No. 2 research university has been successful at attracting outside research dollars.

“Our outstanding teams of faculty, staff and students across all the schools have propelled us over the $400 million mark in research funding,” said Executive Vice President and Provost Liz Magill. “Meanwhile, researchers … are targeting interdisciplinary approaches that improve the chances of receiving grants down the road.”

Bacon’s bottom line: As always, there are two ways to look at this. The positive spin is that, success in attracting research dollars pumps up the Charlottesville-area economy. Over and above the hiring of research staff, projects such as these sometimes get commercialized locally, creating spin-off enterprises and jobs and enlarging the region’s innovation ecosystem. If Virginia wants to be an economic leader, increased university R&D expenditures is precisely what we want to see.

What we don’t know, because university accounting is so opaque, is the degree to which the R&D surge at UVa rides on the back of higher tuition, bigger student loan debt, and/or higher patient charges at the University of Virginia hospital (which accounts for more than half of that R&D). In theory, federal grants cover a portion of the university’s research overhead, but there are so many ways to game the system it is impossible for outsiders to know if the university is gouging the feds, if the feds are gouging the university, or if something else is going on. Furthermore, it is difficult for outsiders to track how much the university is spending on salaries of superstar research faculty, their laboratories, or their staffs of graduate students and researchers. What seems undeniable is that laboratory-intensive disciplines are more expensive than the humanities and social sciences.

A story-line worth pursuing — and I bring this up not because I know it to be true but because I suspect it to be true while acknowledging that more evidence needs to be compiled — is the degree to which the R&D emphasis of U.S. research universities (including Virginia’s) are engines of socio-economic inequality. My hypothesis goes like this: (1) universities extract wealth from students and their families from a wide range of economic backgrounds, and (2) extract wealth from poorly paid graduate students, adjunct faculty, and instructors, in order to (3) support an edifice of highly compensated administrators and super-star research faculty.

In other words, universities are simultaneously wealth-creating institutions and engines of wealth redistribution. That story-line doesn’t feed the class-warfare juices like railing against “millionaires and billionaires.” But it does illuminate a more nuanced narrative that the United States has numerous and dispersed pockets of elite privilege, and that academe is one of them.