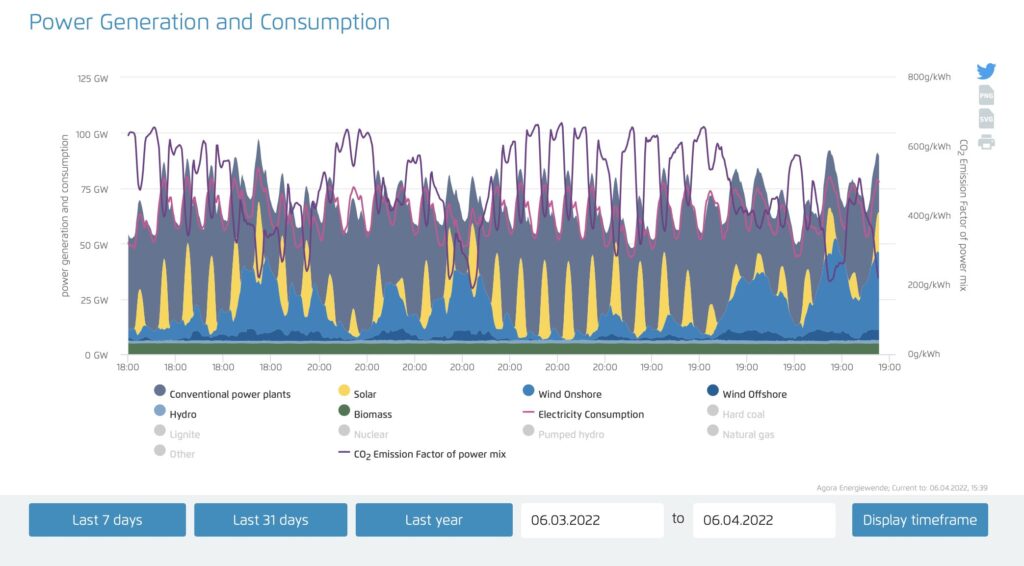 The German Energy Mix in March

When you dig in, the amount of data available on energy usage is stunning, and the presentations are often quite clear and informative. Case in point is the illustration above of Germany’s energy mix during March, in the news now as Europe seeks to wean itself from fossil fuels imported from Russia. But it cannot go without fossil fuels. For that matter, neither can Virginia.

Germany is far more dependent on onshore wind than offshore wind, as you can see in the chart. You can see the daily peaks and troughs from solar.  The vast majority of the delta between their output and the demand line is made up of conventional fossil fuels and apparently nuclear is in that category of “conventional.” But Germany is down to a handful of operating nukes now.

The power output tracks demand well, but the upper thin line shows the fluctuating CO2 emissions that go along with the coal and gas Germany will be using more of, unless Europe opens itself to modern drilling techniques to release gas in its shale formations (a.k.a. fracking) to retire coal.

Speaking of wind, check out this page from time to time. On windy days the output (again, watch both onshore and offshore) can be quite impressive. But not all days are windy. In the German example above, 19 of 31 days required big- time back-up.

Had Virginia’s General Assembly been inclined to work rather than whine and posture, there was plenty for the legislators to do during their paid sojourn to Richmond Monday. For example, one key energy issue oft-mentioned in Bacon’s Rebellion could have been resolved with a Senate vote on a completed  conference report.

House Bill 1257 as introduced created a broad right to use natural gas and a prohibition on any local government seeking to restrict its use through ordinances. The Senate Democrats refused to protect consumers to that extent, believing the green catechism that natural gas is a devilish brew, but a conference report on the bill does create some ground rules if a city such as Richmond wanted to kill off its own gas utility service.

Basically, the compromise focuses only on that issue and confirms the original bill’s requirement for three years of notice and a mandatory effort to find a private company to take over the distribution to retail customers. That narrow bill was fine with House Democrats, with all present on March 12 voting aye.  The Senate went home without taking it up that day and did so again Monday, April 4. Other conference reports languish, as Bacon’s Rebellion has told you.

When told again by the Democrats or their loyal media cheerleaders that Monday was a wasted day, and they were called to town with nothing to do, recall this list in the daily floor calendar of other issues hanging fire in conference reports, all or any of which could have been resolved with time to get to the cocktail hour. Some are intertwined with the budget, but many are not. The word you are looking for is lazy. They are asleep on their wall.

The Bacon’s Rebellion report about the dual and related applications at the Federal Energy Regulatory Commission dealing with gas lines into Hampton Roads wasn’t breaking news. It was sparked by a recent local media report, and Virginia Mercury had also covered the applications when first filed at the end of 2021. Yet the FERC file to date wasn’t showing signs of strong opposition.

But the recent coverage and update in its status stirred the opposition to issue a call to action.

TELL FERC: NO MORE GAS BUILDOUTS IN VIRGINIA. TransCanada Energy is planning to replace 50 MILES of pipeline. This action could have HUGE consequences for the natural landscape, and it will send Virginia in the wrong direction on climate.

For those of you who agree Virginia’s economy should sink further into energy poverty, sign up for their effort here. For those of you who believe natural gas remains vital, as an alternative fuel for home use and as a key industrial asset with no easy replacement, perhaps this time you should wake up and get on the project’s mailing list.

After the defeat of the Atlantic Coast Pipeline, the Virginia Natural Gas Header project and the two independent power plants it would have served, and the continuing effort to crush the Mountain Valley Pipeline, this is probably Virginia’s last chance to reverse its reputation as a violently anti-energy state.  Virginia’s Gasmageddon. (See first item and the illustration above for what our life will be like if they succeed.)