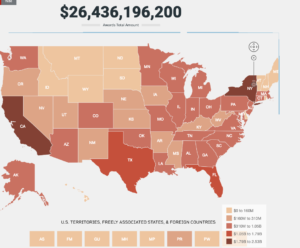 Real money, and we will have borrowed every penny.

Hard to comprehend that much money. That is 7 million million dollars.

I will try here to reduce that to human scale.  At full scale, as is the point here, no government system that we have in place can manage it well.

To illustrate the point, I drilled way down into data from a single federal department, the Department of Health and Human Services (HHS), to see for all of us how some of the ocean of federal COVID money has been distributed so far.

You see on the map that the total amount of grants alone made by HHS alone from the COVID supplemental appropriations passed in March and April of 2020 alone is north of $26 billion; $470 million of that has gone to Virginia governments and private entities to date.

The human-sized example to which I will offer for consideration is the distribution of HHS COVID-related grants to Head Start programs in Virginia. Some programs, especially those of school districts and larger non-profits, have multiple locations. There are 423 federally-funded Head Start locations in Virginia.

The attachment below is the result of my search and is the basis for my assessments here.

Head Start programs include Head Start, Early Head Start and Migrant and Seasonal Head Start. All three will be included when the term Head Start is used in this essay.

The distribution of COVID money into those programs has been very random and uneven. That was not the intent of government, that is just what happened.

The money in the data represents only supplemental funding provided by legislation in March and April of 2020. Those specific appropriations are still being distributed  So there is far more to money come than has been distributed to this point. It too has been and will be the subject of “emergency” distribution rules.

In this tiny sample, the total distributed to this point to Head Start programs in Virginia from the March and April appropriations has been $12.6 million. Head Start money goes to both government entities and directly to individual providers.

I don’t know how much more money from the March and April appropriations is sitting in HHS waiting to be claimed.

All that said, below are some examples of what the data tellingly reveal.

Geographic distribution of the supplemental Head Start money in Virginia has been one of the major anomalies.

People, Inc. of Southwest Virginia in Abingdon received almost $460,000.  t appears to be a terrific organization with a 55-year history in Abington. I make the point for comparison to other potential recipients and geographic areas, not as a reflection on that organization.

From the People Inc. 2019 Annual Report, it “prepared 295 preschoolers for entry into public schools” in that year. If it prepared the same number of kids in 2020 that it did in 2019 (and it may not have done so because of COVID), that organization received $1,559 in supplemental Head Start funding for each child — money appropriated in just the first two months of COVID.

All of South Hampton Roads, with 1.2 million people, has received less than $200,000 from the same grant program. That money went to the Mile High Kids and Community Development Inc. in Norfolk.

Virginia Beach, Portsmouth, Chesapeake and Suffolk Head Start programs received nothing. It appears from the data that no potential recipients there applied. The City of Norfolk also apparently did not apply.

Local government jurisdictions that have been awarded money are the cities of Alexandria, Newport News, Richmond and Fredericksburg and the counties of Loudoun, Hanover, Culpeper, Fairfax, Augusta, Spotsylvania, Buchanan, Hopewell, Lee, Prince William, Orange, Chesterfield, Henrico, Halifax, Stafford, Scott and York. No others are listed.

The local government winners have been the Newport News Office of Human Affairs with over $1.1 million and the Richmond City Public School District at $811,000. Again, that is supplemental Head Start money only.

The grant of $460,000 to People, Inc. of Southwest Virginia in Abingdon was discussed above.

In another example, The Children’s Center, a non-profit offering both Head Start and Early Head Start programs in Franklin, was awarded almost $500,000.

No government was built to do what the American and Virginia governments are being asked to do right now — handle “emergency” distribution of this level of money.

Efficiency and effectiveness of distribution and traceability of spending at this scale are beyond government capabilities.

Some of it will not be appropriated rationally — in the mathematical meaning of the word — against some overarching metric like total number of schoolchildren per state. Some will.

Unanticipated grants that must be applied for on a short deadline with all of the right information provided have proven either to have escaped the notice or be beyond the capabilities of many local governments and small private enterprises.

The government of the Commonwealth will labor under the same weight. It is not structured to either spend or distribute this level of funding with this short a fuse.

All of that is true before we account for political motivations at the government level and both misfeasance and malfeasance at the points where the money is finally spent.

So, we citizens read our newspapers, watch our TV’s and search the web for news about this unimaginable amount money that future generations will have to pay back. We watch politicians argue about the appropriateness of the appropriations but not about the lack of government capabilities to manage them.

When we do, we must understand that the government competence issue looms large. You will seldom if ever read that in the press, which largely favors big government or at least does not want to seem critical of civil servants. I am speaking for civil servants, not against them. They simply can’t do this to the standards most of them set for themselves. Such things frustrate the best of them.

Our governments won’t handle it well because they can’t manage anything efficiently, effectively and traceably at this monumental scale and within these timelines.

That is an allegory for all the enormous new things that some people now want government to do and want it to do in a hurry.

Consider that they are unlikely to go well.

This entry was posted in Budgets, Uncategorized and tagged COVID-19, James Sherlock. Bookmark the permalink.