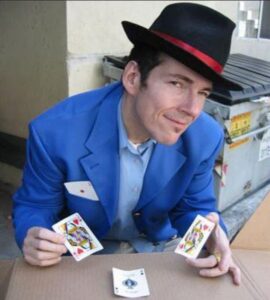 Three Card Monte is a classic short con. The Dealer places three cards face down and the Shill, who is in on the con, attempts to pick the money card. They play boisterously, hoping to catch the attention of some poor sap, the Mark. Thinking himself quite good at following the money card, the Mark puts his money down. Using sleight of hand and misdirection, the Dealer makes sure the Mark never finds it.

A similar game is being played in the media’s coverage of the Virginia Military Institute racism investigation. Call it Three Card Media.

Like its street-hustling counterpart, Three Card Media has three actors in the con: the media (the Dealer), politicians (the Shills), and the public (the Mark). Here’s how it works: In reporting news, the media picks the facts and quotes that fit its narrative. Politicians comment upon the “news,” adding their own spin and distorting the picture even more. The politicians’ quotes become news, and the distortions are amplified. Unable to follow the sleight of hand, the public is gulled into believing a story starkly at odds with reality.

To see how the scam works in the political world, readers should read the Barnes & Thornburg interim report dated March 8, 2021, on the investigation. Then read The Washington Post’s (“WaPo”) March 9th summation of the B&T report, “Racial slurs at VMI a common occurrence for Black cadets, investigators told.”

The Washington Post reporter either has difficulty reading or difficulty telling the truth. His English degree from Princeton University suggests that his affliction is the latter. The quotes that he abducts and disembowels from the report amount to a blatant misrepresentation. His article was fiction parading as fact.

I base that last statement on first-hand knowledge. As a VMI alumnus, I volunteered to be interviewed by B&T attorneys about my observations concerning racism at VMI. (It was virtually non-existent.) When I alluded to the WaPo’s depiction of the B&T report, the law firm’s associate attorney responded, “That’s not what we said.”

Let’s revisit how this report came to pass.

The politicians’ response to the WaPo article was deemed newsworthy. On October 20th, the Associated Press wrote an article entitled, “Probe ordered of VMI after Post’s report on racist incidents.”

As the storm intensified, on October 23 the Governor’s chief of staff conveyed that the Governor and certain legislative leaders had lost confidence in the leadership of then-superintendent, General J.H. Binford Peay III. That prompted Peay’s October 26 resignation letter, which sparked another round of stories.

Northam proceeded to order an investigation into “VMI’s culture, policies, practices, and equity,” shaping the Request for Proposal and hiring a law firm committed to racial justice to “investigate” what the Governor’s October 19 letter already declared to be true.

Many VMI alumni believe that the only way B&T can earn its pay is to sing the
song the politicians want to hear. Such a notion overlooks how the Three Card Media scam is played. The final B&T report can be factual and balanced, but if it contains enough quotable fodder, disingenuous reporters can mine the quotes they like and distill them into digestible propaganda segments for the politicians to comment on.

In my reading, the Interim Report directly contradicted the Governor’s October
19th claims of structural racism. It certainly provided no evidence to back such a claim. Yet, it provided enough quotable fodder for WaPo to distort its overall message, making it appear that it confirmed the Governor’s claims.

When a report says something you don’t like, ignore it and tell everyone that it said something else. Once you understand this charade for what it is, you’ll realize that Three Card Media has become the instrument of choice in the propagandist’s tool box.

Let’s step away from this one tree and discuss the diseased forest. In the 1971 United States Supreme Court case New York Times Co. v. U.S., known as the “Pentagon Papers” case, Justice Hugo Black said in his concurring opinion:

“The Founding Fathers gave the free press the protection it must have to fulfill its essential role in our democracy. The press was to serve the governed, not the governors. The Government’s power to censor the press was abolished so that the press would remain forever free to censure the Government. The press was protected so that it could bare the secrets of government and inform the people. Only a free and unrestrained press can effectively expose deception in government.”

The media no longer exposes the deception, rather it participates in it. We’ve caught WaPo in the VMI con, propagated to further its narrative on racial injustice. How many other cons has it run? How many other victims have been taken in? And now that the con has been exposed, how can we believe the media ever again?