They Are Coming For Your Family, Your Strip Malls 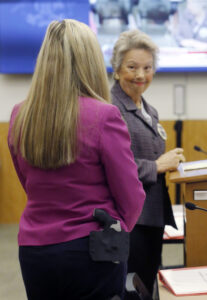 The conservative politician grabbed attention a year or so back when she addressed a meeting at the General Assembly wearing a revolver in a holster on her hip. She’s also feuded with the county Republican Party and was defrocked.

Now Chase is striking again by spreading fears of ANTIFA attacks on mostly white and middle class suburban areas. She says the loosely organized far left group is targeting strip malls at Meadowdale and Hancock Village in Chesterfield County and in Hanover County at Mechanicsville.

She said that members of the Virginia Citizens Defense League, a pro-gun lobby, would be patrolling some of these areas.

Chase said her source for source for the ANTIFA tip was Chesterfield Police Chief Jeffrey Katz. Contacted by the Chesterfield Observer, Katz said he was not her source. “At no time did I share any active criminal intelligence with her,” Katz told the Observer.

After the newspaper story, Chase declined comment but her spokesman said that multiple law enforcement officials had confirmed active ANTIFA moves in the area.

Another issue of concern is using citizen right wingers and gun advocates as privatized Robocops. Some show up at demonstrations wearing body armor and carrying assault-style rifles. They are not official police officers with the power to arrest. They are not trained in crowd control. No one knows how much they know about gun safety, which can be scary since they could easily pop off many shots with their semi-automatic, military style, large magazine weapons.

Similar goons showed up at the bloody, white-nationalist “Unite the Right” rally in Charlottesville in August 2017. Although they apparently did not do anything violent, they tried as best they could to look like real police. They dressed in combat boots, wore body armor with pockets for large-capacity magazines and some had little Confederate flags attached with Velcro to their home-made uniforms.

About that time I wrote an opinion piece for The Washington Post noting that if they tried to bring a fire arm to a public demonstration they could face a year in jail even though Maryland is an open carry state. In D.C., forget it. No guns allowed.

This begs another question – how do you know if someone so armed and attired is a real cop? Some communities such as Fairfax County require police to carry body cameras and have car cameras.

But when federal law enforcement cleared Lafayette Square next the White House of peaceful demonstrators with clubs and tear gas so Trump could use a church for a campaign photo opportunity, the officers had no identifying marks. Some had gear so obscure that one could not tell what agency they were from.

That makes it very hard for the victim of riot police violence to seek compensation or have the assaulting police disciplined.

U.S. Rep. Don Beyer, a Virginia Democrat, has said that his constituents complained about the lack of ID for officers. He’s joining a Democratic legislative effort to require federal officers to wear identification.

“These people could be anybody,” Beyer said.

Such tactics have been used for years by police in some cities during controversial protests, especially during the Civil Rights era. I was at some of those protests years ago and more recently, saw unidentified Russian police attack protestors in Moscow. Putin had “little green men” lead Russian military aggression against Crimea and Eastern Ukraine

So, someone should tell Chase to put a sock in it. Cops need to wear ID markers. Would-be cops and gun nuts must not be pushed on the public.

I have to go to the Wal-Mart and UPS store at Hancock Village in a couple of hours. I’ll let you know if I see any Rambo Wanna-Bees in flak jackets.