There’s Something in the Water, Part II 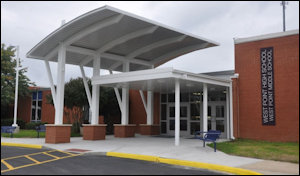 Yesterday I held up the town of West Point school district as a possible model for other Virginia school districts. West Point students consistently rank among the top of all Virginia districts for the rates at which they pass their SOL tests. Socioeconomically speaking, there doesn’t seem to be anything special about the town, which is literally built around a paper mill. Certainly the students don’t share the affluence and high education levels of Virginia’s affluent suburban districts. So, what gives?

Could it be a matter of demographics? West Point may not be rich, but it has a slightly lower percentage of poor and free-lunch students than the state as a whole. Could that be a factor? No, not an important one. Adding the average pass rates for reading, writing, history, math, and science SOLs yields a composite score for economically disadvantaged West Point students in the 2018-19 school year of 413 — compared to 334 statewide. In other words, West Point’s disadvantaged students are way out-performing their disadvantaged peers nationally. A related observation: The gap between advantaged and disadvantaged kids in West Point is 52 points. That compares to a 103-point gap statewide.

Does West Point devote more resources to its students? According to Virginia Department of Education (VDOE) numbers for the 2015-16 school year, West Point spent in line with the state average — $11,893 compared to $11,745. West Point’s spending premium is miniscule.

Perhaps West Point allocates its resources differently. Drawing on 2018 data, John Butcher points out that West Point spends about $500 per student on instruction than the state average but less on transportation (busing), food, summer school, pre-K and other education. (West Point also spends slightly more per student on administration and significantly more on operations & maintenance.)

One place West Point economizes is on teacher salaries. Across the board, the school system pays its principals, assistant principals, and teachers less than the state average.  The differential is vast. Average salaries for West Point’s 102 teachers were only 56% that of the average salaries for 103,000 teachers statewide. A portion of the pay gap likely can be attributed to a lower cost of living in West Point and surrounding King William County, but only a portion. Something else must be at work. (See update on salary figures below.)

There is a chronic teacher shortage in Virginia. How can West Point get away with paying so little (even adjusted for the cost of living)? Non-pecuniary factors likely come into play. I would hypothesize that job satisfaction is significantly higher. Teachers tend to be idealists; they’re not in it for the money. But they do crave recognition and respect — from administrators, from their students, from parents, and from the community. As former West Point parent Maria Paluszay observed in a comment in a previous post, West Point teachers do enjoy respect.

Outside of teacher surveys, there is no metric for respect. However, there is a proxy metric — school discipline data. VDOE reports the number of disciplinary infractions in Virginia schools. While a few infractions are severe, most reflect routine interactions in the classroom. Fewer reported infractions suggests that students are better behaved and create fewer disruptions — in effect, they show their teachers more respect.

West Point scores well by this metric, but not off-the-charts well. Using 2018-19 data from the Safe Schools Information Resource student offender reports, I calculated the number of students charged with infractions as a percentage of the student body. The lowest in the state was Lexington with zero infractions, followed by Falls Church with only 1.2% of its student population disciplined. Petersburg city schools were at the high end at 21%. Fairfax, the state’s largest school district, came in at 2.8%. West Point’s ratio was 4.4%, ranking it 26th among 132 school districts. Good but not stellar.

There is one complicating factor, however, that limits the usefulness of this metric. Small numbers of disciplinary infractions can mean one of two things: (1) fewer disciplinary problems, or (2) a lower rate of reporting disciplinary problems. If West Point reports all infractions while other school systems suppress the reporting of incidents — perhaps to show that they are making “progress” toward restorative justice goals — the school system may be even better than it looks based on raw numbers. But there is no way to tell from the statistics themselves if such a thing is taking place.

If there are any conclusions to be drawn from the meandering analysis in this and the previous post, it is that no single factor can explain West Point’s success. One factor that I have not yet mentioned (because the numbers are too small to break out separately) is that West Point apparently has few English as as Second Language (ESL) students, a variable that depresses test scores. Spending per student does not seem to be a significant factor, although Butcher’s data suggests that the allocation of that spending might be. The lower-than-average teacher salaries are worth a closer look in order to answer how West Point pays so little yet retains such good teachers.

Other possibilities to ponder: Does the small size and geographic compactness, allowing kids to attend what amounts to neighborhood schools, play a role? Do West Point schools have a different pedagogy? Do West Point teachers and administrators set higher expectations — and do parents share them? Statistics won’t yield answers to these questions. Perhaps one day an enterprising education reporter will visit West Point to take a closer look.

Update: Reader Jim Weigand supplies different figures for West Point teacher salaries based upon data submitted to the Division of Legislative Automated Systems in January 2018. In that document, the average West Point teacher’s salary in the 2017-18 school year was reported as $41,507 compared to $56,855 for all school divisions, or about 73%.