I offer below a chart of Virginia public school Spring 2019 SOL pass rates (all schools all grades) for different subgroups of students.  The 2018-2019 school year was the last before COVID, i.e. the last “no excuses” year.

After the SOL passing scores had been lowered dramatically in math for 2019. 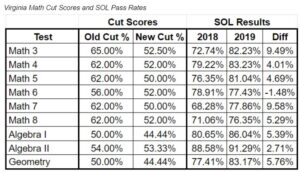 Those are pass rates, not higher levels of achievement.

Also, remember that half of the schools in Virginia were worse than average.

NAEP results. For those that think this is just an SOL issue, we will take a look at Virginia’s 2019 National Assessment of Educational Progress (NAEP) results for NAEP basic proficiency.

Virginia in 2019 tied with Oklahoma and Rhode Island at a 71% pass rate for at least basic level reading proficiency. Virginia’s score for grade 8 reading dropped 6 points in two years, among the three worst declines in the nation. 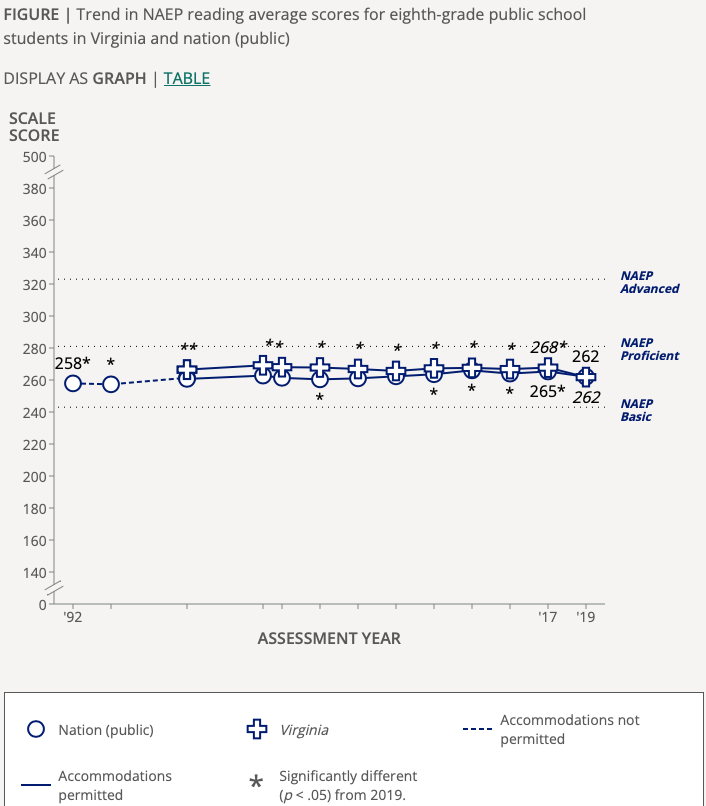 So, what to do? First, stop fooling ourselves.

Let’s admit that we need to overhaul the design and administration of our schools and provide learning climates, curricula and pedagogy that achieve far better results.

I have looked in vain for any signal that the General Assembly, Board of Education (BOE) and Superintendent of Public Instruction are leading an effort to fix the fundamental issues.

We know what works for poor and minority children, children with learning disabilities and English learners. The best Charter Management Organizations (CMOs) work.  But the General Assembly and VDOE leadership will not acknowledge this fact because of politics.

They take their cues from the teachers unions and the University of Virginia School of Education. Neither will brook any mention of charter schools, much less as role models for Virginia public schools.

I have shown the following chart several times. 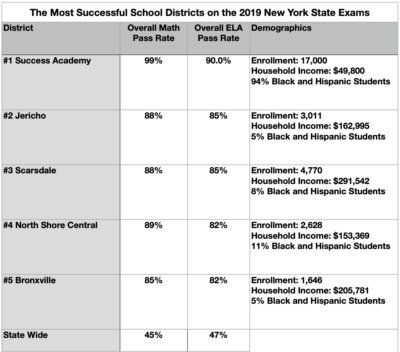 I have searched in vain on the University of Virginia School of Education and Human Development (speaking of vain) for any sign that these results have caused that institution to review the Success Academy methodology that achieved them.

Success Academy is by far the best of breed of the CMOs in the education of poor minority children, but not the only one that far outperforms regular public schools. I provided a breakout of the very specific practices that are key to the vast outperformance of Success Academy in an earlier post.

But let’s go to an official federal Department of Education (DOE) source.

The National Charter School Resource Center (NCSRC) is funded by DOE  If UVA or VDOE was interested, and they are not, NCSRC searched all of the peer reviewed studies and published for DOE STUDENT ACHIEVEMENT IN CHARTER SCHOOLS – What the Research Shows.

“Among these, two practices were found by at least three studies each to affect student achievement positively: increased instructional time and a school-wide behavior system.”

“More instructional time in itself may not be sufficient unless the time is devoted to core subjects.”

“Dobbie et al. found that school culture and expectations, which it defines as “a relentless
focus on academic goals and having students meet them… very high expectations for student behavior and discipline…and adherence to a ‘No Excuses’ philosophy” are positively correlated with student achievement.”

Thus, the characteristics that have worked to increase student learning are common sense, traditional approaches. It does not take an ed-school degree to understand why they work.

The fact that these are traditional approaches is clearly the objection of the progressive Left.

That is why the General Assembly, UVA, and the current Board of Education (BOE) have not recommended increased instructional time focused on core subjects and high expectations for student behavior and discipline. In fact, they have gone in the opposite direction in both instances.

The curriculum changes wrought by the BOE in response to changes in Virginia law in recent years have favored progressive social goals over core learning outcomes. The pre-2018 regulations for student behavior and discipline have been watered down beyond recognition.

The Constitutional requirement for a quality education is the responsibility of the General Assembly.

Black voters are the most important and loyal component of the Virginia Democratic base. Yet the Democrats in the General Assembly have ignored their Constitutional responsibilities towards education in general and improving the learning of Black children in particular.

Parents should consider protesting at the state Capitol when the General Assembly returns in January.