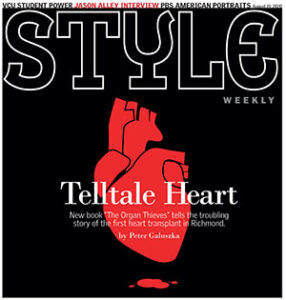 On Saturday, May 25, 1968, the Medical College of Virginia, now part of Virginia Commonwealth University, made medical history.  A surgeon recruited from Stanford University a couple of years before successfully transplanted the heart from one middle-aged man to another.

MCV officials in Richmond officials were ecstatic. Organ transplants were a hot, fairly new surgical procedure. Once stuck in the junior varsity leagues of medical training and research, MCV was basking in glory from media coverage.

There was one peculiarity that no one seemed to notice. The name of the heart donor was missing. As it turned out, the donor was Bruce Tucker, a Richmond Tucker happened to be African-American.

Tucker had suffered a serious brain injury from a fall the day before. He was taken to MCV. Hospital officials made a perfunctory search for his relatives. Tucker’s brother was desperately looking for him and his business card was in Bruce’s pocket. No one found it.

So, after Bruce was pronounced dead, his heart was removed and placed in the chest of Richard G. Klett, a white business executive from Orange. This shocking story is well documented in a highly readable book by Richmond author and journalist Chip Jones that has been just published by an imprint of Simon & Schuster. Tucker’s brother finally located hospital officials who started talking about an autopsy and that he needed to find a funeral director.

Jones is a former reporter for the Richmond Times Dispatch and the Roanoke Times where his team was a finalist for a Pulitzer Prize for its coverage of a massive strike against Pittston that swept the Appalachian coal fields. He also wrote for Virginia Business where Jim Bacon was publisher and I once was executive editor.

Jones has written three other books, mostly about the military, notably the Marine Corps. One of his relatives was Marine Commandant.

I spoke with Chip for a cover story I wrote for Style Weekly this week. It deals with Richmond’s overweening insecurity as a prominent community, the city’s history as a booming market for snatching freshly dead and mostly Black bodies for research and just how dangerous scientific fades, such as transplants can be.

If you still need even more evidence of the systemic racism in Virginia, open Jones’ book “Organ Thieves: The Shocking Story of the First Heart Transplant in the Segregated South.”

26 responses to “The Tell Tale Heart: Racism in Richmond Medicine”