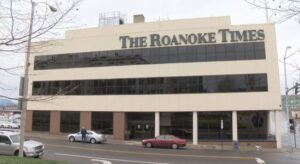 The Roanoke Times building went up for sale in January.

The Roanoke Times is laying off nine newsroom employees, resulting in a 20% decrease in staffing, reports Virginia Business. Both Henri Gendreau, who covered the Virginia Tech beat, and Claire Mitzel, who covered K-12 schools, were informed that April 23 will be their last day. The two reporters broke the story about several racial episodes at Virginia Military Institute (and did a far more creditable job, incidentally, than The Washington Post.)

The newspaper also is laying off a digital editor, a copy editor, and three editorial assistants who contributed to local sports coverage. Including previous cuts, the Roanoke Times has lost more than 25% of its newsroom employees since early 2020 when the paper was purchased by Iowa-based Lee Enterprises. The newspaper is the dominant provider of news coverage in western Virginia.

I keep hoping that the long-term decline in newspaper readership and advertising revenue will bottom out, that newspaper publishers will find a sustainable business model based on paid subscriptions and digital advertising that strips out the costs associated with printing, newspaper distribution and print ads. No one seems to have found the formula yet.

As a former Roanoke Times employee — Steve Haner and I worked there in the last 1970s and early 1980s — I confess to feeling nostalgic for the good ol’ days when the newspaper industry was basking in peak profitability and newsrooms enjoyed resources that could never be imagined today. That was a time when our editors had the budget to dispatch Doug Pardue (who went on to share a Pulitzer Prize at the Post and Courier for a series on domestic violence) and me to the far Southwest coalfields and spend weeks developing multi-part series on the vaguest of notions.

The Roanoke Times punched above its weight in those days. We gave The Virginian-Pilot and The Richmond Times-Dispatch, Virginia’s two heavyweight newspapers of the era, a good run for their money in the annual Virginia Press Association awards competition. Although many reporters saw the Roanoke Times as a stepping stone to a better-paying gig in a bigger media market, we had real élan.

It startles me to see that the newspaper is laying off the reporter covering K-12 schools. The newspaper always prized its school coverage. Apparently, readers couldn’t get enough. Regardless of our beat, every reporter was required to write a monthly “In the Schools” column… which in most cases was a challenge, as we didn’t cover a school beat and, therefore, had no sources. But if we didn’t come up with our own ideas, our editors would assign us some boring story based on a school district press release. That requirement was a source of endless griping, as I recall, but we complied.

The timing of Claire Mitzel’s layoff couldn’t be worse, as public schools struggle through the COVID-19 reopening and grapple with the Critical Race Theory agenda emanating from Richmond. Western Virginians will get more and more of their news from social media sources of dubious validity.

I complain a lot — and justifiably so — about the leftist slant of Virginia news media. News staffs have their narratives, and they pick stories, sources, and facts that fit those narratives. But at least they do usually check their facts. We may be getting only one side of the story, but we can be fairly sure that the facts are accurate. Moreover, in my observation, the Roanoke Times has been less narrative-driven and has done a better job than most of its peers about infusing its reporting with diverse perspectives.

I sure hope the newspaper touches finds a way to pull out of its dive. It would leave a huge hole to fill.