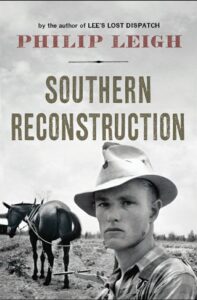 America’s culture wars are national in scope, but they hit especially close to home in Virginia, which was, before the current cultural cleansing, home to many monuments to Confederate soldiers and generals. Central to the struggle over history is a desire by many to replace narratives that whitewashed the evils of slavery and segregation with “true” narratives that highlight White guilt. The danger is that the narratives now in vogue will be no more reflective of reality than the happy-darky renderings of 50-year-old Virginia history textbooks.

We can all agree today that slavery and segregation were moral abominations. But the history as morality tale — of unremitting evil perpetrated by Whites against Blacks — leaves out a lot. History is complicated. The history of Reconstruction and its aftermath is extremely complicated.

As a starting point for studying Southern history, you would do well by reading Philip Leigh’s book, “Southern Reconstruction. I thought I was fairly well versed in American history. It turns out that there was much I did not know.

In Leigh’s telling, Reconstruction took place against a backdrop of (a) rampant corruption, (b) tariffs and banking policy that reduced the South to an economic colony of the North, and (c) and Republican Party machinations to ensure their electoral majority in Congress by, among other measures, disenfranchising Southern war veterans.

The Civil War obliterated the economy of the Southern states. Freeing the slaves, while a moral imperative, had the practical effect of wiping out the South’s major source of wealth. From our present-day vantage point, we understandably react by thinking, boo hoo, that’s too friggin’ bad. But it meant that the Southern economy had to be reconstituted from scratch.

The other major source of wealth in the South was land. What Southern armies had not devastated through the conscription of horses, cattle, pigs and crops to feed its armies, Union armies had pillaged through a policy of total war — undermining the South’s ability to fight by destroying its agricultural economy.

Meanwhile, financial capital, never as abundant as in the North, was liquidated. The South had financed much of its war effort through the issuance of bonds and currency, all of which was rendered worthless. One hundred million dollars in insurance investments and twice that amount in bank assets had vanished. The war destroyed two-thirds of Southern Railroads. (One railroad that had owned 50 locomotives, 50 passenger trains and 550 freight cars ended the war with only one locomotive, two passenger cars, and four freight cars.) Steamboats disappeared from the rivers, manufacturing geared to the war-time economy ceased to exist, and Union armies confiscated the last remaining source of wealth — cotton bales.

About 300,000 Southern White males had died in the war, and maybe another 200,000 were incapacitated. More than one in three white males over the age of 18 were dead or crippled. Farms, bereft of labor, drifted had back to nature. Protective levees  were destroyed. Returning Confederate soldiers and their families faced conditions of near starvation. This extraordinary suffering, which far exceeded anything experienced in the North, left deep scars on the Southern psyche.

“So great was the devastation and anemic the rebound that by 1900 the South had barely recovered to the level of economic activity prior to the Civil War,” Leigh writes.

One might question why it took so long for the South to recover, as Europe and Japan did after World War II. Here is the difference. The U.S. launched the Marshall Plan to help Europe get back on its feed. The North did nothing to relieve the South of its devastation. To the contrary, in Leigh’s telling, federal government policy reduced the Southern states to an economic colony.

Even before the Civil War, the United States had instituted tariffs designed to protect Northern manufacturers from foreign competition at the expense of consumers nationally and the South in particular, which accounted for 80% of all exports. The tariff was an irritant second only to slavery that drove Southern states to secession. Over the course of the war, Congress boosted tariffs from 19% to 48%. For many years, tariffs accounted for roughly 90% of all federal revenue. The largest expenditure by far through the balance of the 19th century was pensions for union soldiers and their families. Southern veterans received no federal pensions, relying instead upon whatever meager stipends their states could provide. In other words federal tax policy systematically extracted wealth from the impoverished South.

The Civil War also prompted a shift in U.S. banking and monetary policy. Previous to the Civil War, banks were allowed to issue their own currency. There were no federal minimum reserve requirements, and loan activities were regulated by the states. The enormous financing needs of the Civil War — the North borrowed 57% of its expenditures — impelled massive changes to the monetary system. The North issued “greenbacks” which after the war were made convertible into gold. The end result was decades-long price deflation that favored borrowers but punished Midwestern farmers and Southern cotton growers. In parallel, the National Bank Act set capital requirements and operating regulations that were beyond the means of impoverished Southerners, leaving the region largely under-banked. As late as 1900, only 7% of America’s national banks and capital were located in former Confederate states. The paucity of banks kept interest rates high and depressed economic activity.

“Increasingly,” writes Leigh, “Northerners began to treat the South economically as an internal colony. It was consigned to be a source of raw materials and a secondary market for Northern manufactured goods.”

Against this backdrop, federal troops occupied Southern states in 1865 and administered them with martial law. The primary virtue of the Reconstruction era was that freed slaves were given the rights of citizenship, including the right to vote. Ironically — and this tale is rarely told — some 150,000 Southern Whites who served in the Confederate army were disenfranchised, As the federal government turned governance responsibilities back to the states, political leadership fell to a coalition of white Northern opportunists known as carpetbaggers, native White Southerners who claimed to have been loyal to the Union, known as scalawags, and free ex-slaves.

While Reconstruction-era governments represented a necessary step forward for freed slaves, Leigh argues, it was ruinous for many Whites. Like their northern counterparts, the South’s new political class used the powers of office for self-enrichment. Corruption was hardly unique to the South, but its consequences were more deleterious. The new political class ramped up spending — some for legitimate causes such as educating Blacks, some of it to subsidize construction of railroads at scandalously high cost, and much of it to line politicians’ pockets. This free spending saddled Southern states with high levels of debt, the burden of which was supported mainly through property tax revenues. Even though 1870 property values in the eleven former rebel states were less than half the value in 1860, writes Leigh, the amount of property taxes paid was four times greater. Unlike in 1860, landowners no longer had the means to pay the taxes. Across the South, hundreds of former plantations were put up for sale.

The resulting legacy of debt crippled the Southern states financially. By 1874, according to Leigh, the ten Reconstructed states were almost $300 million in debt — as much as the combined debts of the remaining 27 states of the Union that year, and greater than the total assessed value of land in the former Confederate states.

Amid the destitution of the Civil War’s aftermath arose the pernicious practice of sharecropping. Landowners provided plot, seeds, and housing, which the worker repaid after harvest, along with a significant share of the harvest. While the popular imagination conceives of sharecropping as a form of Black economic subjugation, it was common among Whites, too. Indeed, says Leigh, there were more White sharecroppers in the South than Black.

Federal policy perpetuated the practice, which kept poor Southern farmers of both races trapped in a system of debt peonage. Tariffs raised the cost of tools and other manufactured goods. Banking and monetary policies kept commodity prices depressed while boosting interest rates charged on advances for seeds, tools, and other items. While Northerners denounced Southern Whites for the immiseration of Blacks, they took no account for their own contribution to the keeping the entire region an economic backwater.

The Reconstruction Era ended in 1877 when federal troops withdrew, martial law ended, and Whites reasserted their control. It was not a foregone conclusion that the region would turn to Jim Crow segregation. Before voting restrictions were enacted, Blacks still held the franchise, and various parties vied for their votes. The first priority of the so-called Redeemers who came to power was to reduce the cost of operating state governments, restrict the issuance of state bonds, and slash property taxes, says Leigh, not to deprive Blacks of the vote. Indeed, until the 1890s, white politicians solicited the Black vote with dances, picnics and (popular among all segments of the electorate) distilled spirits.

Leigh describes some of the long-term consequences.

Laissez-faire economic philosophy became so engrained that it was practically transformed into a test of Southern patriotism. … Deep suspicion of government power was widespread. … Southerners became habituated to government parsimony, even to the point of rationalizing their neglect of the needs of handicapped and destitute citizens. With minor exceptions from private charities, white Southerners received almost no assistance in recovering from the Civil War. Liberal spending by corrupt carpetbag regimes merely worsened the situation by leaving the South heavily indebted.

Jim Crow segregation did not occur until populist movements among Whites took root. Populist parties advocated reform of banking laws, deflationary monetary policies, and railroad monopolies. Much of the ire against these perceived unjust institutional arrangements was directed at Blacks, who were indelibly associated with the old Reconstruction Era regimes and Republican rule in Congress. Disenfranchisement of Blacks began in the early 1890s and became ubiquitous by 1900.

Nothing in Leigh’s narrative excuses or justifies what happened to Blacks in the South after Reconstruction, much of which was aggravated by deep-rooted racism that that is rightly considered heinous today. But Leigh does explain it. Jim Crow did not occur in a vacuum. Southern Whites felt oppressed — they felt, to borrow a word in currency today but not then, “colonized” — and populists took out their resentment against those who had made common cause with their oppressors.

Some scholars undoubtedly take issue with Leigh’s interpretation of Reconstruction and its aftermath. I don’t know enough to vouch for it, but I do find it plausible. This is not happy-darky material.

Unless we are satisfied to indoctrinate our teachers and children with the current politically driven narrative, Leigh’s is a version that should be told along with the others. Of one thing I am 100% certain: Narratives morph with the times as people continually reinterpret the past consistent with their own worldviews. There is no one “right” version of history. A proper education should expose students to competing versions. Let them learn to treat all narratives with critical scrutiny.

This entry was posted in Culture wars and tagged James A. Bacon, Virginia history. Bookmark the permalink.