The Primary Results — Explaining the Obvious 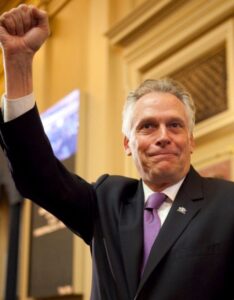 There is no sense doing a deep dive on Tuesday’s elections results because there is not a lot of depth to explore.

And here we go…

The Democrats got the statewide ticket that they wanted and worked to produce.

McAuliffe’s win margin was impressive to say the least. He over performed expectations in easily cresting 60%, but spent a lot of money in doing so. More on that later, but TRM outspent the field.

Jennifer Carroll Foy ( 20%) came in a not-strong second having outraised/spent Senator Jennifer McClellan (12%) just under 2 to 1. (Vote % rounded up)

Yes, the turnout was expected to go down for Democrats, and it did. The key is always who and where. It looks like the Where was along the Atlantic Coast Pipeline route:

But the Who could be a problem for the Democrats as younger, more progressive voters stayed away.

The Democratic drop off occurred in the Tom Perriello/Carroll Foy/McClellan/Others vote. That went from 239k to 184k, a loss of 55,000 votes. That McAuliffe beat Ken Cuccinelli in 2013 by 56,000 is only a coincidence.

In the end though, the Democrats spent 60% more than 2017 and yielded 10% fewer votes for a much larger field of candidates. Another reminder — McAuliffe outraised/spent Cuccinelli by 70% and won by just over 2 points.

Down ballot for the Lieutenant Governor nomination, Hala Ayala beat the field handily with 37.5%, which is pretty strong for a six-way race. She positioned herself well within the base of the Democratic Party and got many key endorsements that brought her the victory. Her appeal was demographic and geographic, as she won in the north and east of Virginia while Sam Rasoul won Southwest and rural localities to the west. The Washington Post endorsement of Rasoul didn’t matter as much as those of the elected Democratic leadership.

The word establishment is overused these days and it’s also inaccurate. Establishment connotes a sense of entitlement and inactivity. The Democratic elected leaders are anything but — they are highly active and engaged. Republican electeds avoid this important engagement with the base of their party — to their detriment.

The Attorney General Upset Alert that looked like it was fizzling out did just that. Incumbent Mark Herring won a solid victory over Delegate Jay Jones as the late undecideds broke enough for Herring. Still, Jones went from 3% in February to 43% on Tuesday. That’s not nothing. A little more time and a lot more money, Jones could have gotten or flipped enough votes. The Washington Post endorsement probably didn’t factor as much as Herring’s financial, geographic, and incumbent advantages.

In the House of Delegates primaries, FIVE incumbents lost. (See why I don’t use the word establishment?)

Democrats saw four House incumbents go down — Ibraheem Samirah, Lee Carter, Mark Levine, and Steve Heretick. Some press accounts are trying to portray this as move to the center. It’s not. Not one House floor vote will change as a result of these outcomes. HOWEVER, this is a branding upgrade for the Democrats in that the more performative politicians in Samirah, Carter, and Levine lost. The floor voting will be very similar but the headaches (and bills) they produced are gone. Nadarius Clark, D-BillsSmith, defeated Steve Heretick and identifies as a Democratic Socialist.

In the end, challengers don’t win — incumbents lose. Sure, two of the House incumbents who lost also lost statewide bids, but obviously there wasn’t a whole lot of love back in their districts. Jennifer McClellan and Jay Jones didn’t have that problem. Because of that they will (and should) run again in 2025.

The Republicans also had some House of Delegates primaries.

Wren Williams saw an opportunity to knock off incumbent Delegate Charles Poindexter, and did by 25 points. While an impressive victory for Williams, this is another example of an incumbent taking his district for granted. Today’s Republican base voter want fighters more than they want doers. Poindexter, good man that he is, lost this more than Williams won.

At the Beach, Tim Anderson beat Chris Stolle who was seeking a rematch against Nancy Guy. Anderson more successfully captured the mood of Republicans — but just barely. Whereas several observers think Anderson has less of a chance than Stolle in the general, until data is presented to support that claim it’s just conventional chattering wisdom. 2021 is going to be a base turnout election and Anderson won’t lose many Stolle voters — they will still want to beat Nancy Guy.

Side note – if you are a Republican and you want to win a Virginia Beach election, you hire Brian Kirwin. Period. Anderson’s and Anne-Ferrell Tata’s wins were #s 64 and 65 for Kirwin.

Now, we return to the Summer Season of Election Nerd Disneyland.

You have just entered the most expensive gubernatorial campaign in our history.

Chris Saxman is executive director of Virginia FREE. This column is republished with permission from his Substack column, The Intersection.

This entry was posted in Elections, Politics and tagged Chris Saxman. Bookmark the permalink.