The Other Side of the “Intensifying Rain” Claim

With the rainy remnants of another hurricane heading for Virginia from battered Louisiana, the stories of a coming Climate Armageddon will again ramp up. A couple of good examples of what to expect recently appeared in Virginia Mercury, the main one quoting numerous sources claiming Virginia is seeing more and more intense rainfall and will suffer more flooding as a result.

Don’t accept that on the slim evidence presented without paying close attention to what you are not being told. The facts omitted are often the main problem with the Climate Armageddon Narrative, which usually avoids outright falsehoods but regularly ignores adverse evidence.

The most powerful assumption in government right now, whether in Washington or Richmond, is that the Climate Armageddon Narrative is fact-based. It is instead based on models. A recent state-sponsored report which also warns of more and more intense rainfall, quoted by the Mercury, relies heavily on models and totally ignores how they usually offer a range of predictions. The report focuses only on the more dire of those predictions, not those which merely extrapolate historical trends. (More on that in a second story on sea level rise.)

On rainfall a data trend is claimed. The Mercury article uses a chart to illustrate 125 years of rising rainfall total for Virginia, indicating about a third of an inch of added rain per decade since 1895. The chart was produced by NOAA but not used in the state report. Perhaps even the state report’s authors were leery of it.

Here is another look at the same data which produces a very different impression. First, unlike NOAA, it showed total rainfall. By starting its illustration only after the first 20 inches of rain per year (when each year starts at zero), NOAA’s visual is an intentional distortion.

Prepared by Kip Hansen. You can still see a bit of a recent upward trend, but far less dramatic. The 50-inch line is just a visual reference.

Your eye sees much larger gaps from the peaks to the valleys, and from the bottom of the chart to the top, on the NOAA version. The claimed upward slope of 3.3 inches per century (per century) looks more alarming. Everything looks very different when the annual rainfall totals start at zero and accumulate by month. This counter illustration prepared by co-author Kip Hansen only goes back to 1970.

Surely one of the most intense rainfall events in recent Virginia history was the downpour that destroyed much of Nelson County as the remnants of Hurricane Camille passed in 1969. There was no official rain gauge at that location, and the estimates of 20 plus inches of localized rain that night are merely that – estimates. The modern doppler weather radars didn’t exist then.

Those radars have now provided about three decades of reliable measurements on rainfall intensity. More data, and perhaps those claims can be sustained in future years. But the claims in the Mercury article are anecdotal or rely on one (Norfolk) or only some (see below) of the official measurements in the state.

How many other times have outlier events such as an isolated cloudburst evaded official measurement? Or areas of drought? Certainly it happened far more often a century ago than now. Comparing rainfall now with the records of 100 or 125 years ago is simply not valid. Even if you did have 100 years of hard state-wide data, would that truly provide a definition of “normal”?

Decades ago, expensive flood control projects have been installed in Richmond and the small industrial city of Buena Vista. Wouldn’t that indicate this is not a new concern? How often are they used? Is that pace accelerating? The absence of that evidence proves nothing but does raise questions.

To bolster its claims of coming monsoons, the Mercury cited a study that used data from 43 weather stations and found evidence of more rainfall and rainfall that was more frequently intense. The authors looked at 1947 to 2016 because when they looked at 1987 to 2016, “due to the heterogeneity in precipitation and limited statistical significance, these results are not shown.” Translation: For the most recent 30 years, nothing statistically significant was found. This, too, is contrary to the Mercury’s thesis.

Also, note only 43 of the 146 Virginia weather measurement locations had sufficient data to go back to 1947.  These authors at least are fairly cautious, concluding, “Over the 70-year period (1947 – 2016), mean annual precipitation in Virginia seems to have increased.” (Emphasis added.) The word “seems” never appears in the Climate Armageddon Narrative. Yet claims are being made elsewhere about trend lines back to 1895, using them to create concern about the future.

How about the other side of the equation? If next year is a drought year, what will that do to that trend line so crucial to NOAA’s claim of greater and greater rainfall amounts? Lack of rainfall can also be truly life- or economy-threatening, and might scare some Virginians more than 3 added inches of average annual rain.

Yet another huge inconvenient fact: As we are discussing those recent rainy years, about half of Virginia this summer was in in dry or drought conditions. (See illustration at the end.) Check out the Palmer Drought Severity Index for the southeastern United States for the past 30 years. You won’t see a hint of warning there that the scale has tipped toward excess rain, just the normal rise and fall around the mean. 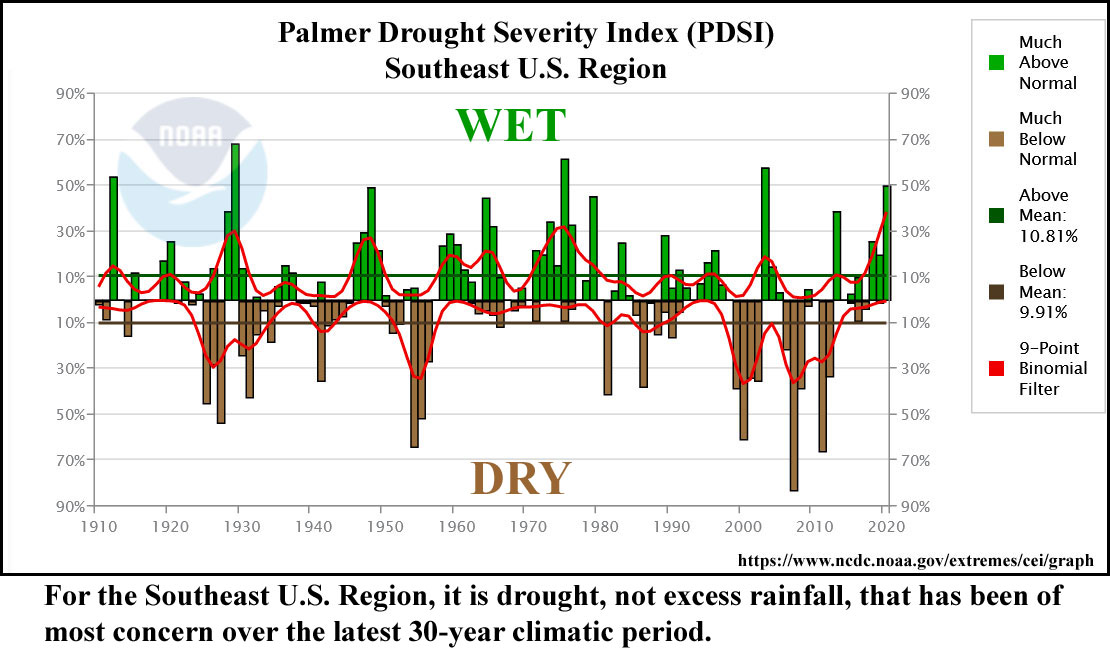 The bottom line of the Mercury report and the state document is a warning that Virginia is not ready for major flooding events. This is correct, and it doesn’t matter whether the events come more frequently, less frequently or at the same pace as the past few decades. This is an engineering and land use challenge that should be taken up whether or not you lie awake nights listening for pounding rain. It is not due to climate change.

Kip Hansen is an experienced analyst and writer on issues of climate and human-caused climate change. Found as a I was seeking a volunteer consultant to help with my response, he added several points to my argument and prepared several illustrations. He deserved more than a “hat tip.” 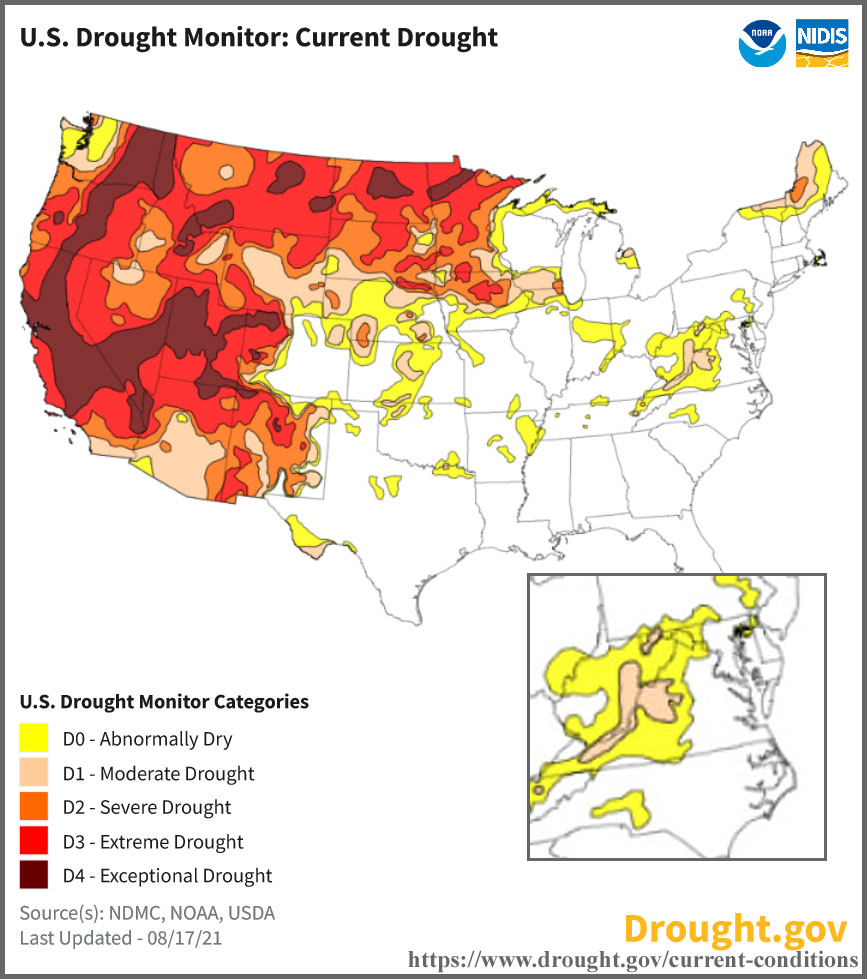