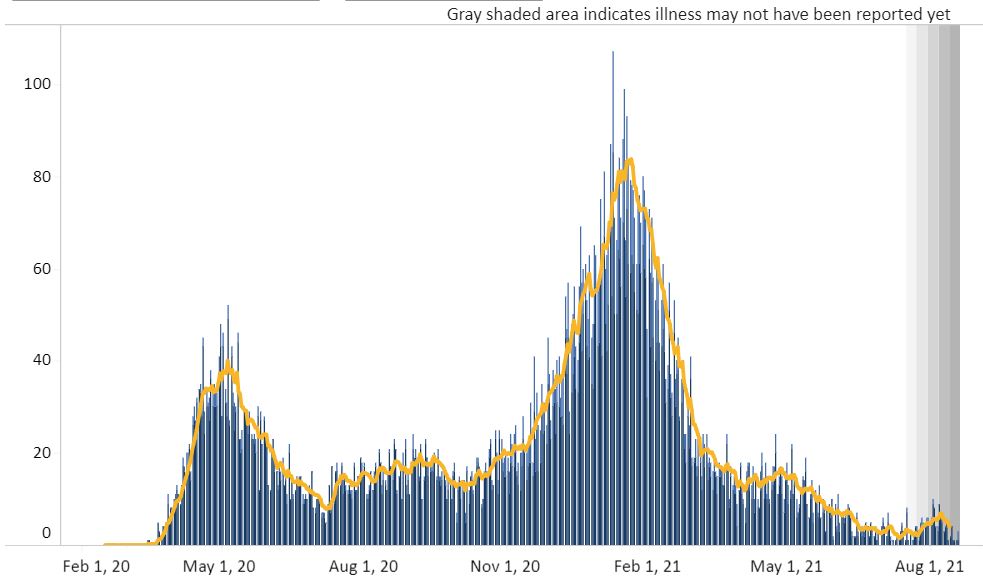 The number of confirmed COVID-19 cases is surging in Virginia, driving continued controversy over mask and vaccination mandates. As has been the case throughout the 18 months of the epidemic here, the media is focusing on the number of cases, which undeniably has increased sharply. The seven-day moving average is up to 1,850, a third of the December-January peak.

Hospitalizations have risen, too, with the seven-day moving average now exceeding 40 per day and showing no sign of leveling off. The good news (so far) is that, as seen in the graph above, deaths have nudged only a little higher. Perhaps the greatest under-reported story of the pandemic is how good hospitals and doctors have gotten at treating the virus.

Here’s what we’re not measuring on a daily basis: suicides, drug overdoses and other tragedies stemming from the shutdowns in response to COVID. Life is full of tradeoffs, and so is public health policy.

Meanwhile, I’m picking up on an increasingly widespread view that we will never “defeat” COVID-19. The received wisdom is changing in several ways.

First, we’re going to have to learn to live with the virus. The virus will continue circulating even among people who have gotten the vaccine or developed natural immunities from previous exposure. The shutdown measures of 2020 are economically, fiscally, and, for many, psychologically unsustainable. Insofar as Blacks and Hispanics are affected more adversely, shutdowns are, by the disparate-impact logic prevailing in many quarters today, racist.

Second, everyone is going to get the virus sooner or later. If you haven’t gotten it yet, though, you’ll likely fare a lot better if you’ve been vaccinated. So, unless you have natural immunities already, wise up and get vaccinated.

Third, living with the virus means getting vaccine boosters. We now know that vaccine efficacy declines over time. It’s not two-and-done. It’s two-and-come-back-for-a-booster-in-a-year. Get used to the idea. Unless…

Fourth — and I realize this is heresy, but the idea is gaining respectability — if you get the virus, you will develop antibodies that will confer protection that proves longer lasting than the vaccines. If everyone is going to get the virus eventually, it stands to reason that everyone will develop natural resistance sooner or later.

It is astonishing to me that the scientific establishment hasn’t given more serious attention to how powerful and lasting this immunity is. It is impossible to pursue rational public health policy without getting a firm handle on this basic knowledge.