The Most Powerful Woman in State Government 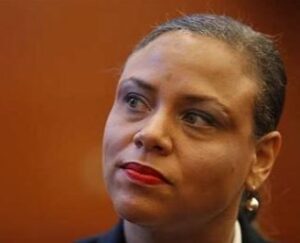 Shortly after his blackface scandal, Governor Ralph Northam took a deep dive into the literature of critical race theory, determined to reinvent himself as a champion of African-Americans and foe of racism in Virginia. One of his most consequential actions was appointing Janice Underwood, director of diversity initiatives at Old Dominion University, to fill a newly created cabinet-level position — the first in the nation — as chief of diversity equity and inclusion.

Underwood has gotten sporadic mention in the media when giving speeches or addressing legislation, but the mainstream media, as woke as it purports to be, has not paid her much attention. Whether that’s due to media oversight or her desire to keep a low profile, I don’t know, but she consented recently to give an interview to Virginia Business, and the public should be very interested to know her view of the world.

Underwood’s portfolio gives her license to get involved in race-related issues across the entire scope of state government — not just government personnel policy but as far afield as predatory lending to minorities, the effects of the COVID-19 epidemic upon black health, and the racism investigation at the Virginia Military Institute. With Northam’s sanction to intervene anywhere in state government, she just may be the most powerful member of his cabinet — without question the most powerful woman in the administration.

She is not “window dressing,” Underwood assures Virginia Business. She is engaged in “institutionalizing equity so that it can be deeply embedded — to confront the inequity that’s also deeply embedded.”

For example, Underwood has played an important role behind the scenes in the VMI racism controversy. She compliments the Board of Visitors for “the work that they’ve done, and the progress that they’ve made.”

“These are conversations that everyone should be having — not just at VMI,” she says. “I’ve been a proponent that we need to make all of our institutions of higher education — public, private, four-year and two-year — inclusive and really edified with the framework of inclusive excellence. That’s the model I believe in, and it’s the model by which I’m creating a diversity strategic plan for all state government.”

Let that sink in. VMI may be the wedge issue that allows the Governor’s Office to intervene in the affairs of all of Virginia’s supposedly independently governed institutions of higher education.

As a Black leader, I know about racism. Sometimes when you join with people who are allies in this work who aren’t Black, you got to make sure people understand that we’re in this together, but I’m also a victim of it as well. I’ve experienced it. You’ve got to have cultural humility, because you haven’t walked in my shoes and you’ve only read about it or heard about it, or maybe saw it from a distance because you have a relative who’s Black, or a friend. …

Racism and inequity have had a 401-year head start. … I think you need to make the business case for diversity, equity and inclusion, and it’s really about not just feel-good changes. It’s about interrupting systems of oppression. …

You have to stop asking Black people to solve something we never created. We didn’t create structural racism; we didn’t create slavery. Why are we being the ones asked to fix it? We understand it. We know what it feels like. …

Underwood may be militant, but she appears to have a more acute understanding of human nature than virtue-signaling whites.

Pointing your finger at someone and calling them a racist never gets you anywhere. It’s not always what you say, but how you say it. It’s about how you make people feel. If I make you feel like a worthless racist because I’m name-calling you a racist, then we’re not going to get anywhere, because all it’s going to do is make you defensive. …

I don’t want to be viewed as the diversity police. It gives people like me a bad name, and it actually does more just to destroy the legitimacy of the field.

She doesn’t have much use for virtue-signaling whites, although she uses the Leftist phrase “white fragility” instead of “virtue signaling,” a conservative term.

What I’ve learned is there are a lot of people who say they are allies in this work and who believe they are DEI [diversity, equity, inclusion] champions, but also don’t understand how they undermine the work because they believe that they are such champions and aren’t willing to interrogate this lifelong learning.

Then there are the people who, in Underwood’s worldview, are even worse than the virtue signalers: “people who want to return to ignoring white supremacy in plain sight.” That, I suppose, would include people like me who think that the obsessive focus on race is highly counter-productive and that putting “anti-racist” ideas into action will have devastating unintended consequences for the very people they are meant to help.