The Invisible Side of the Student Loan Crisis: Debt Collection 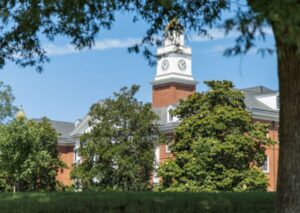 VPM News tells the story of Joshua Bowser, a Virginia State University dropout who was living at home in New Jersey with his parents and working two jobs. Unbeknownst to the young man, he owed the Commonwealth somewhere between $6,900 and $10,700 (the paperwork gave different figures) for unpaid tuition and fees.

In April Bowser was summoned to a court hearing in Chesterfield County by Virginia’s Attorney’s General’s office, which, among its many responsibilities, is in charge of collecting debts owed state agencies.

Bowser had enrolled as an out-of-state student at VSU and spent two semester there. He says the experience was a positive one, but he had to drop out because his parents could no longer afford to keep helping him pay for school. Despite a Pell grant and federal loans covering the cost of tuition, he still had to pay more than $1,500 in university fees, more than $1,900 for a meal plan, and $3,300 for on-campus housing in the fall 2012 semester alone. “It’s expensive,” Bowser said. “That’s the whole reason why I left.”

This story is illustrates so many things that are wrong with our higher ed system today.

A VPM News analysis of court records found that between April 2020 and April 2021, the AG’s office sued to collect years-old tuition and fees from more than 150 VSU students. The balance due in most cases was between $3,000 and $6,000. On top of that the AG’s office added a 30% collections fee, plus interest charges going back to the initial default date, even though many cases idled for years before landing in court. Students from VSU, a historically black university, were “disproportionately represented” in the lawsuits, VPM News notes. (The AG also took some Northern Virginia Community College and College of William & Mary to court that year as well.)

A cavalier disregard for debt. The first outrageous thing about the Bowser story is that the young man had no idea he was liable for the debt. VSU bears some responsibility for that, but it’s also on him. Who does he think paid his room, board, and fees? The tooth fairy? Did he think room and board were free? Did Bowser not recall signing the loan documents? Was VSU negligent in informing him of how his year in college was being financed? Conversely, perhaps VSU administrators did inform him and the message did not sink in.

We repeatedly hear stories — the Wall Street Journal has been running a series of them — of students who cavalierly rack up tens of thousands of dollars of debt. Many profess surprise at how much they owe, and they feel embittered about how their financial futures have been mortgaged. The system has created a generation of modern-day debt slaves. Especially egregious is the fact that many students pile up debt without ever earning a degree that would qualify them for a job paying well enough to pay off the debt.

There is something seriously wrong with a system that makes it so easy for so many to pile up so much debt and to be so blithely ignorant of what they’re doing.

Outsourcing the dirty work. I have written extensively about the student-loan crisis in the past. What I did not realize, and what the VPM News story drives home, is how the debt collection process works compounds the misery of indebtedness. This process is problematic in several ways.

First, at least in Bowser’s case, it took eight years for the debt to wend its way from VSU to the Attorney General’s office. That is unconscionably long. It is not unreasonable for people to assume after eight years that they are not under any obligation, and to base important life decisions on that assumption.

Second,  as several VSU students told VPM News, they didn’t know about their court hearing because they paperwork was sent to an outdated address. Says VPM News: It’s considered legal service for a sheriff’s officer to post the notice — called a warrant in debt — on someone’s front door; they don’t have to guarantee someone lived there or was aware of it.” That’s just crazy.

Third, VSU didn’t undertake the debt collection itself — it offloaded the dirty work to the AG’s office, which adds on 30% collection fee plus accumulated interest… which in Bowser’s case had been accumulating for eight years.

The front end of the college-loan crisis is scandalous enough. Student-loan debt new exceeds $1.5 trillion. Roughly one million Americans default on these loans every year. Most defaulters never completed a degree. The debt, which can never be discharged (unless Congress decides to forgive it), weighs on their ability to access credit, buy a home or start a business.

The back end of the college-loan crisis adds insult to injury. The collections process for debt owed directly to Virginia State University (as opposed to being owed to the federal government) can compound the liability by 30% to 40% or more. If people can’t pay off the debt, how can they pay off the fees and interest?

Debt forgiveness and moral hazard. Virginia state law requires state agencies to “aggressively collect debts” — not an unreasonable policy. People need to pay their debts or the system breaks down. VPM News focuses on the hardship the law causes. The AG’s office keeps debts on its books indefinitely, and waits until someone gets a new jobs or tries to buy or refinance a home to collect again. Normal consumer protections don’t apply.

The usual solution proffered for student-loan crisis is debt forgiveness. But forgiving those who fail to pay off their debts is a slap in the face to those who do, and it creates moral hazard. If people see others getting their debts forgiven, they are more likely to take on reckless levels of debt themselves. Moreover, forgiving debts does nothing to ensure that the next generation of students doesn’t take on excessive debt and require forgiveness in return.

The system is broken. Colleges and universities have a conflict of interest. They want to maximize revenue from tuition, fees, room and board, so they have an incentive to admit students regardless of ability to repay their debts. But they suffer no consequence if students default. In the instance of VSU and other higher-ed institutions in Virginia, they don’t even have to collect the debts, they just hand off the nasty work to the AG’s office.

Making matters worse, higher-ed institutions are under pressure to “diversify” their student bodies, which entails admitting more poor minority students whose personal circumstances make them more likely to drop out and default. (Eighteen percent of student-loan defaulters are Black.) Institutions pat themselves on their backs for their commitment to social justice even as they perpetuate social injustice.