The Great Reshuffling of Higher-Ed Enrollment 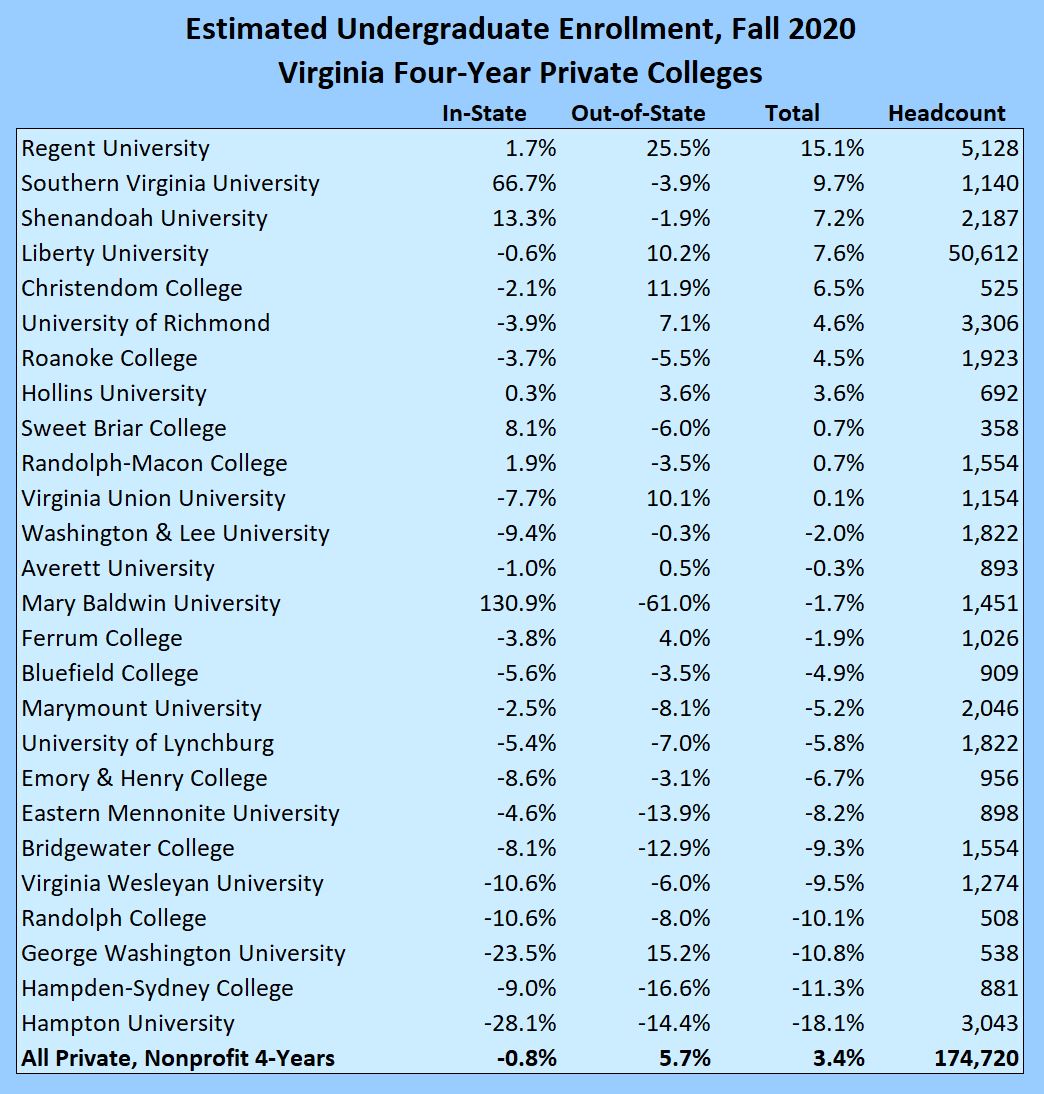 Yesterday I noted the fact that college enrollments in Virginia were holding their own despite the uncertainty and turmoil created by the COVID-19 epidemic. In particular, based on State Council of Higher Education for Virginia (SCHEV) data, I noted that enrollments had increased strongly — 6.6% — in the category of “four-year nonprofits,” most of which are small, liberal arts colleges. That seemed surprisingly — and counter-intuitively — upbeat. I had expected small liberal arts schools, which generally charge higher tuition, to suffer as students and families re-thought their educational priorities.

One of the more fascinating findings is that four of the five biggest winners in the enrollment sweepstakes this year are schools organized around traditional values — Regent University, Liberty University, Christendom College, and Southern Virginia University. Liberty, in Lynchburg, was founded by the Rev. Jerry Falwell, Sr., a fundamentalist Christian. Virginia Beach-based Regent was founded by Pat Robertson, also a fundamentalist Christian. Christendom is a conservative Catholic College in Front Royal. Southern Virginia University, located in the Shenandoah Valley, is affiliated with the Mormons.

The other finding is that Liberty University, which accounts for about 60% of undergraduate enrollment in the entire four-year nonprofit category, saw a surge in total “out-of-state” enrollment, including undergraduate, graduate and professional programs — a 9,872 increase in all. It’s a good bet that this enrollment eruption occurred mostly in online programs, an area in which Liberty excels. If you take Liberty out of the mix, the four-year nonprofits as a group saw an enrollment decline of more than 500 students.

Regent saw a similar lift to its “out-of-state” numbers — 1,060 students – which likely also reflects increased interest in the university’s online degree programs. Because Regent is a smaller institution than Liberty, the enrollment impact in absolute numbers is not as great, even though the percentage increase was bigger.

To what do we attribute this great reshuffling? Do Liberty and Regency owe their rising enrollment numbers to the fact that they have strong online programs or the fact that they market themselves as havens of cultural conservatism? Or both?

We can get a clue by looking at Christendom, a conservative Catholic institution that saw a 6.5% enrollment increase in undergraduate sign ups even while Marymont, a Catholic college in Northern Virginia conspicuously committed to a social justice agenda, experienced a decline in undergraduate enrollments of 5.2%.

Here’s how the Christendom website interprets the enrollment trend:

This fall marks a record year for enrollment for Christendom. In today’s increasingly secularized culture, it is clear that Christendom’s liberal arts education—grounded in the Truth—is more needed and relevant than ever before. Students desire more from life. They want a challenging and meaningful curriculum informed by the perennial truths of the Faith and they recognize the importance of an in-person education.

The student body also includes a number of students who transferred from other schools because they were not offering in-person education this fall. According to Phillips, they all sought out Christendom for a similar reason: in order to gain a robust, Catholic liberal arts education in an in-person educational environment.

In other words, Christendom, which sells its in-person educational experience, owed nothing to online learning.

Bacon’s bottom line: Perhaps I am interpreting the data in the way that confirms my preconceptions, but here’s what I think: We are beginning to see a Great Reshuffling in which students and parents who, dismayed by the progressive takeover of many higher-ed institutions, are seeking alternative institutions where their values are upheld rather than spit upon. The COVID-19 epidemic might be accelerate this trend, but the movement runs deep and will far outlast the virus.

This entry was posted in Culture wars, Education (K-12) and tagged COVID-19, James A. Bacon. Bookmark the permalink.

4 responses to “The Great Reshuffling of Higher-Ed Enrollment”