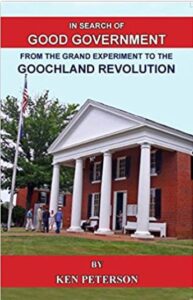 The “Goochland Revolution” might be the most under-appreciated political upheaval in recent Virginia history. In the early years of the Obama administration the Tea Party movement energized small-government conservatives against the big-government policies of President Obama. The populist surge petered out in Virginia, as it did elsewhere, and it had little lasting institutional impact — except in one place, Goochland County, an exurban locality of 23,000 inhabitants west of Richmond.

Flocking to the polls in record numbers in 2011, the Goochland revolutionaries voted to throw the bums out. And when I say “throw the bums out,” I mean they swept the Board of Supervisors clean of every member but one (who was allied politically with the insurgents) and tossed out every member of the School Board.

After taking over, the board demanded the resignation of the entire Planning Commission, and replaced the directors of public utilities, community development, human resources, and  economic development. The school board hired a new school superintendent. And for good measure the county treasurer was convicted of embezzlement and sent to jail. But the changes didn’t end with personnel. The new crew implemented far-reaching changes in fiscal policy.

Since 2011 Goochland has vaulted from from a locality on the brink of defaulting on a huge water-utility bond issue to one of three rural Virginia counties with a AAA bond rating. The Goochland Revolution proves what financially savvy conservatives are capable of — even if they don’t always deliver — when they come to power.

The story that follows comes from Ken Peterson, a lead architect of the Goochland Revolution. I emphasize his role because he wrote a book, “In Search of Good Government: From the Grand Experiment to the Goochland Revolution,” and he granted me a lengthy interview. Peterson downplays his role, which is insists was a team effort, but there is no question that he, as a former Wall Street deal maker, injected the financial expertise that made the turnaround possible.

The story begins Sept. 11, 2001. Peterson was working in Manhattan nearby when two passenger jets crashed into the World Trade Center. He and his wife decided it was time to leave. They embarked upon a tour of the 50 states to find the “best place on earth” to move to. They discovered Goochland County, a bucolic rural setting set in rolling hills not far from the amenities of a large metropolitan area, within easy driving distance of the mountains, the beach, and Washington, D.C. Buying frontage on the James River, they proceeded to build their dream house.

One thing the Petersons had failed to research was the quality of local government. As they found out shortly after sinking a large sum of money into their new homestead, Goochland County was a fiscal time bomb with a very short fuse. “I had no idea the county was on the verge of bankruptcy,” Peterson recalls.

In 2002 Goochland County had approved a massive multimillion bond issue (giant by Goochland standards) to finance construction of the Tuckahoe Creek Service District, a water-sewer district handling spillover growth from Henrico County: primarily the West Creek commercial park, but also Broad Street, River Road and the county courthouse area. Before the 2008 real estate crash, the county had forecast growth of 11% annually and gambled that growth would help pay the bills. The crash happened, and the growth did not materialize.

The bond deal had made some provisions for a reversal of fortune. The county could defer payment, but the unpaid interest would be tacked on to the back end. Eventually, though, payments would come due, and the deal had pledged various county assets and revenue streams as collateral: the utility district’s assets and cash flow, the county’s share of the Commonwealth of Virginia’s support for public schools, a cash collateral account, and a surety bond.

Bond owners had one more backstop. The county originally agreed to pay an ad valorem real estate tax of $0.31 per hundred dollars of assessed value to support the bond payments. If all other assets and revenue streams failed to cover cover the bond payments, the add-on tax would increase to $0.85 — this in a county where the base real estate tax was $0.53.

Bottom line: the bond holders had the county by the short and curlies.

Concerned citizens approached Peterson to take a look at the bond deal. The county had accumulated 10 years interest and unpaid principal. The water-sewer system was running at about 10% capacity. After he had trudged through the 500-page document he told them, “You’re worse off than you thought.” He told his wife, “We need to put up a for-sale sign or we need to stay and fight.” During his Wall Street days, he had spent four years working on bankruptcies and workouts, and he thought he could bring his skills to bear. He chose to stay. “If you see someone drowning,” he says, “you jump in.”

The first step was overthrowing the old regime. Peterson ran for county supervisor. That turned out to be the easy part. Unrest was so rampant that Goochland revolutionaries (including one incumbent) won all five supervisor seats. Peterson himself garnered 68% to 69% of the votes, as he recalls.

Peterson became the point man in the ensuing bond negotiations with the Virginia Resources Authority (VRA). The VRA was a critical intermediary in the deal. Like many smaller localities in Virginia, Goochland had no bond rating. The VRA was set up to pool resources and expertise, and to gain more favorable financing terms. Technically, VRA had been the intermediary, issuing bonds on behalf of Goochland. In other words, the VRA owed the bond holders and Goochland owed the VRA. There ensued some bare-knuckle brinksmanship in which Peterson extracted important concessions from the VRA and bond holders alike as he figured out how to restructure the debt.

A 2012 bond restructuring brought Goochland some time to get its fiscal house in order without boosting the ad valorem tax. Last year, the county restructured its water-sewer debt yet again again in a $61.3 million deal. Growth and development had resumed, property tax revenues hade surged, and thorough-going fiscal reforms had earned the county a AAA rating. The new bond structure saved Goochland $12.2 million in bond payments through 2042, a net present value of $8.5 million.

Goochland residents learned a very important less: Be verrrry careful issuing bonds. Be wary of the kind of complex, creative financing that the 2002 bond deal engaged in. Understand the risks you’re taking. Goochland was lucky indeed that Peterson had moved to the county. Few rural Virginia jurisdictions have elected officials who can understand complex bond deals much less know how to work them out.

Fixing the bond debacle was just the first step in the Goochland Revolution, though. The Board of Supervisors has instituted fiscal discipline into every nook and cranny of county government, implementing a new model for planning capital improvements, for zoning, and for economic development. In an upcoming post, I will detail the reforms that have kept taxes low and won a AAA bond rating while improving the quality of government services.